This is a pleasant and scenic campground at about 8,200' elevation.  Located about 20 miles west of the town of Gunnison, it is one of several campgrounds located along the three reservoirs along the Gunnison River and covering several miles.  While there are several campgrounds in this recreation area, Elk Creek is the only one that has electrical hookups and a dump and water-fill station, so it is very busy during the summer.  And because of the high elevation, it is cooler than a lot of places in Colorado, so it attracts a lot of campers from Denver, which is pretty hot right now!!

The only thing this campground really lacks are showers, which is a problem for a lot of campers. 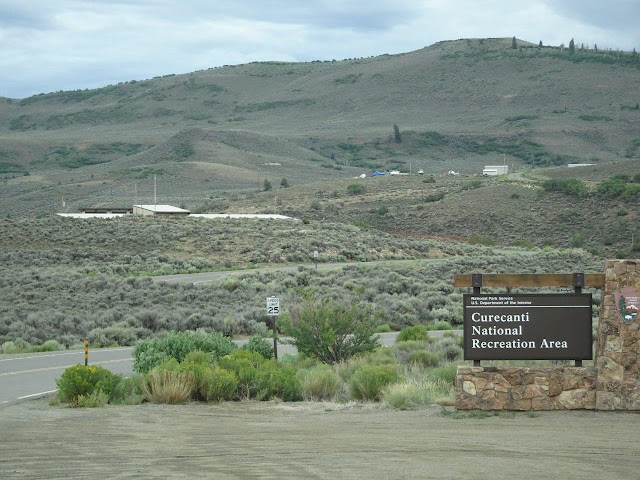 Some pictures of my site and the campground. 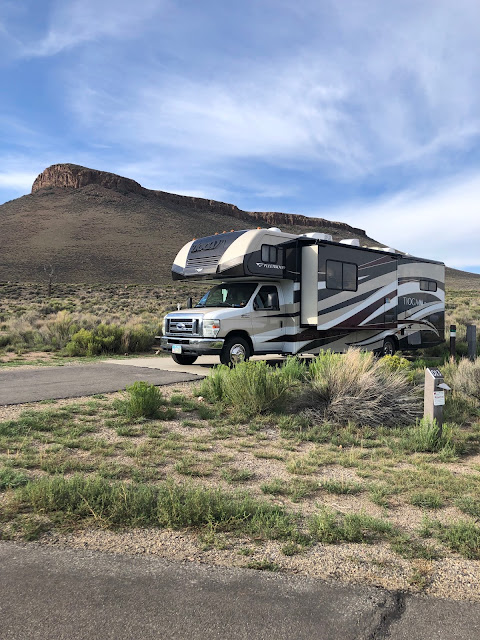 I chose a campsite at the very end of the electric hookup loop, so I had a lot of privacy and a nice, paved pad and patio!  Nice not to have to walk around in dirt and dust. 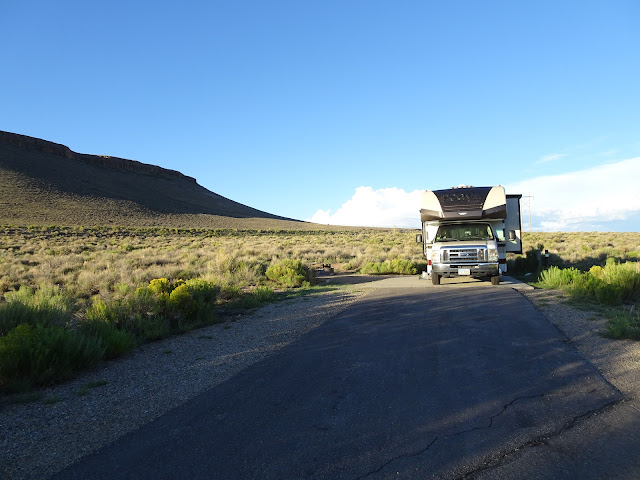 Because my site was a bit high, I had a good view of the rest of the campground.  Unfortunately, I had a long hike to the trash dumpster!! 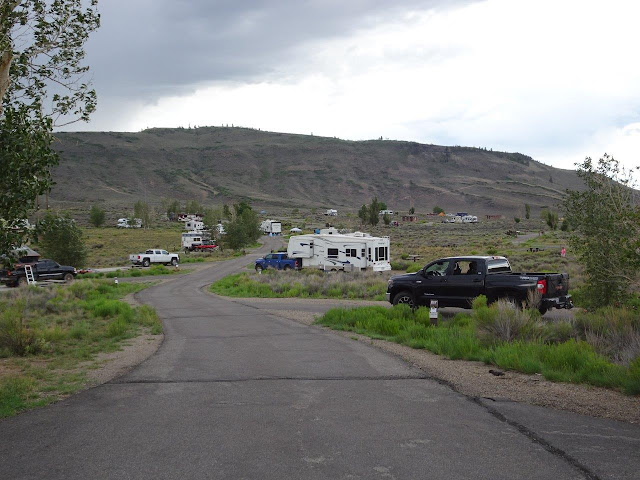 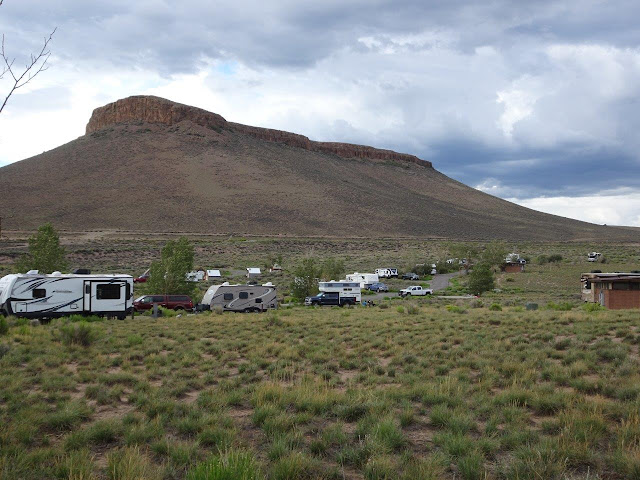 You can see one of the lakes at the far end of the campground. 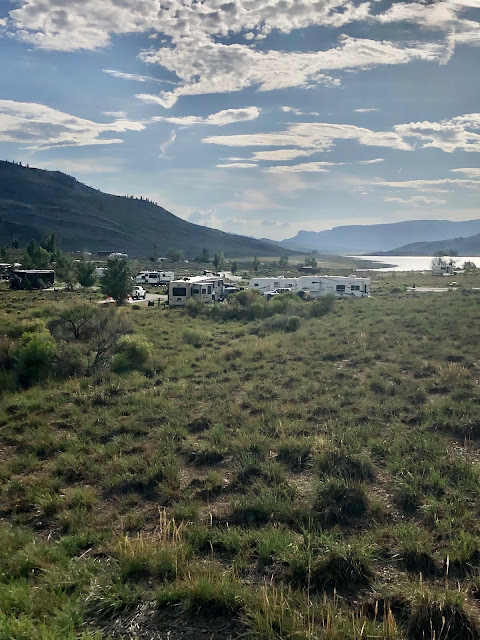 This is one of the three reservoirs created by the dammed up Gunnison River.  Lots of boaters around, even with the lakes fairly low levels. 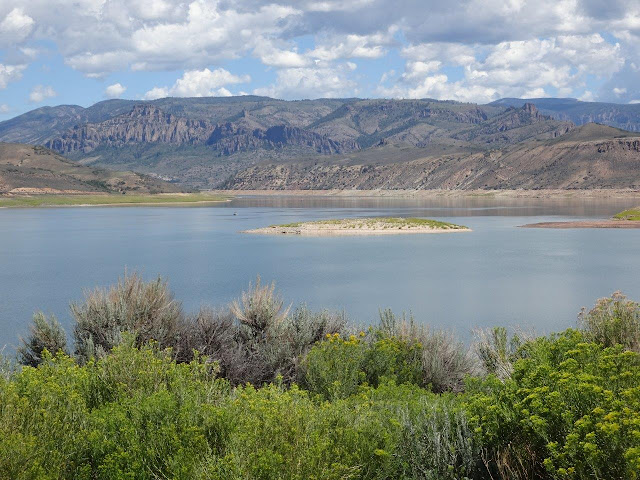 Some scenery leaving the campground, headed went to Montrose and Ridgway SP. 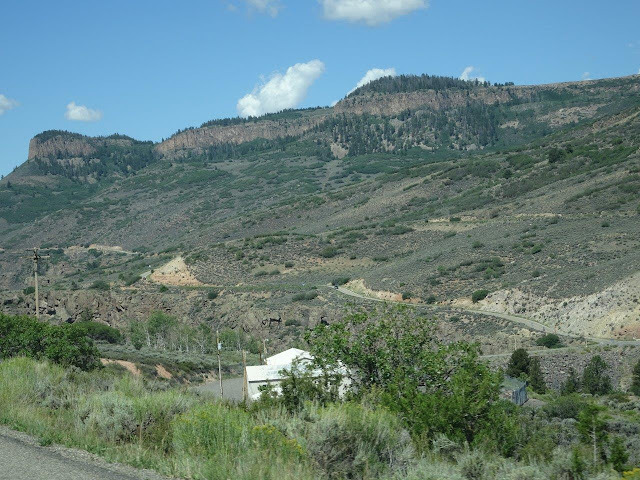 A few miles down the road to the west was a major construction project.  At this point, the road goes through a narrow canyon with steep walls.  There had been a lot of boulders falling on the roadway, and there were almost no shoulders for a 4-5 mile stretch.  There had been very limited openings of the road for most of the past year, but they finally opened it up to one-way traffic at least during daylight hours.  It was completely closed at night.

Anyway, widening the road to reduce rock falls and provide wider shoulders meant that they had to cut back several cuts.  You can see some of the work that has been done on the left side of this photo. 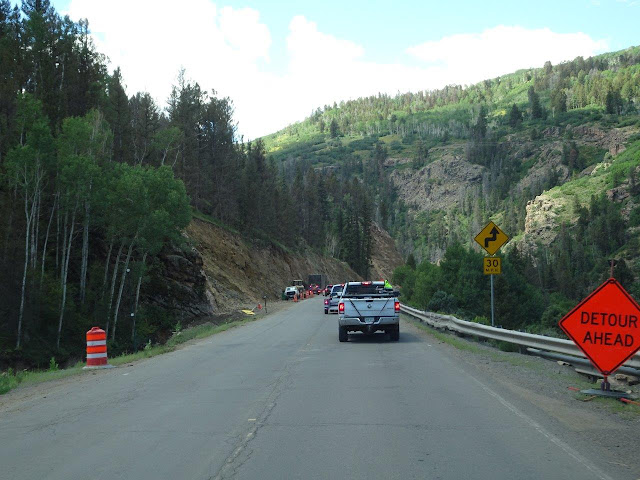 It must have been exciting when they pulled down big rocks on this roadway--no way for construction workers to get out of the way because there was a steep drop-off on the right to the river below. 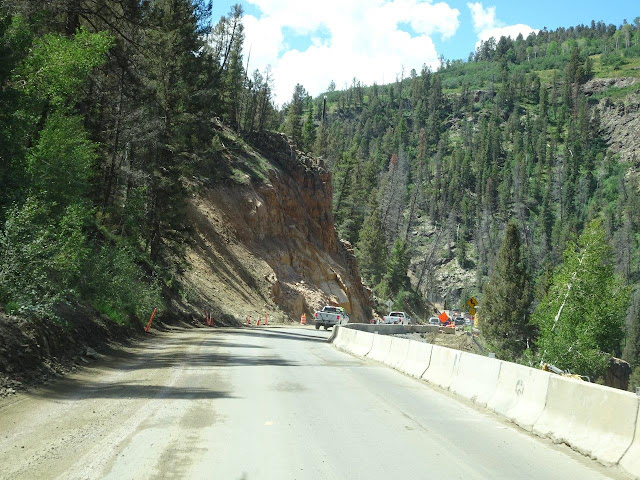 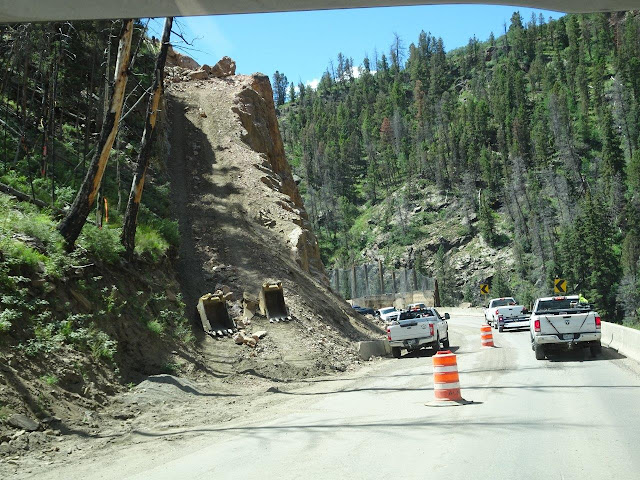 I could not get a photo of the tall boom on this machine that was clearing rock from the cliff face, but just know it was at least double the height you can see here!  And this rock looks like granite, so not easy to remove. 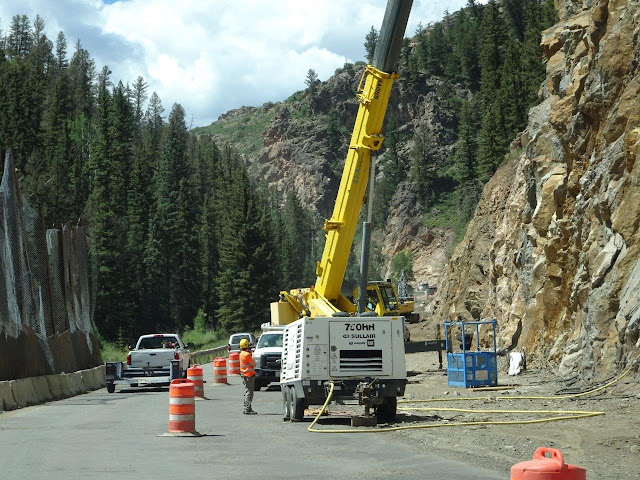 Another rock face that they had widened. 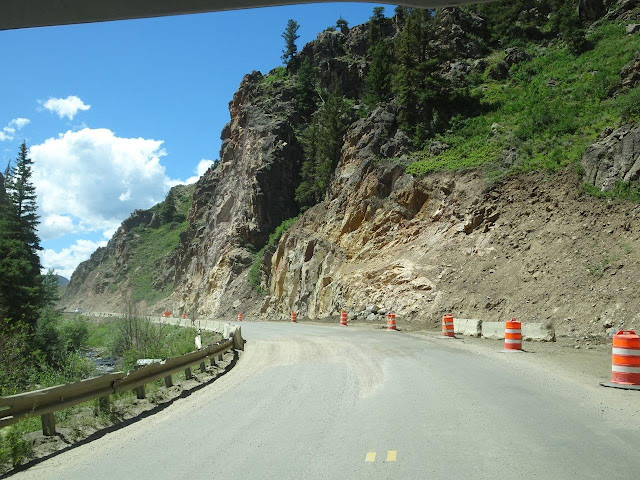 Whew!  It felt good to get out of the canyon and beyond the construction. 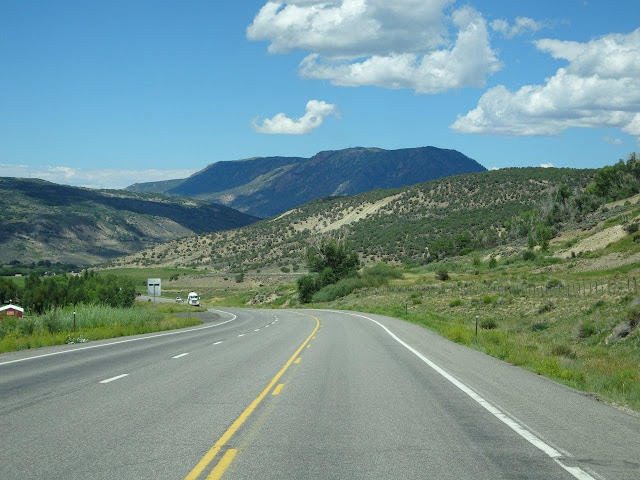 Now, there was one thing that I discovered that this campground had a lot of--MICE!  They were probably in and out of my motorhome for the first few days I was camped there, but it was on the fourth day that I was watching TV, and a little grey furry mouse ran out from the space at the end of my couch, looked at me, and ran back!

This was either a really dumb or a really bold mouse because it was early evening, all the lights were on in my living room, and my TV was on.  I jumped up, and ran outside with my flashlight to find my mousetraps, but it has been several years since I have had a mouse problem so could not find any.

Next day, I headed back to Gunnison and stocked up on mouse traps.  That evening I caught one mouse, and the next night I caught two!!  However, I decided not to use the sticky traps I had bought, so I was out of mouse traps again.  Luckily, I left the next morning and stocked up again at Montrose.

Stay tuned to see if the mice followed me to my next campground or decided to abandon ship as I left.

Posted by Grandma on the Road at 2:45 AM