8/14 Drive on Million Dollar Highway through Ouray and Silverton, Colorado

I had been warned about this road being scary and dangerous in a car, let alone a big motorhome, but I decided to try it anyway because I really wanted to go to Silverton.  Silverton is an old mining town that is most well-known as the high terminus of the Durango to Silverton narrow gage railway that is traveled by hundreds of tourists daily on several trains.  The problem is that the road from Ouray to Silverton can be steep and twisty, and without guard rails.

So, I headed out from Ridgway State Park south through those mountains I had been looking at for several days. 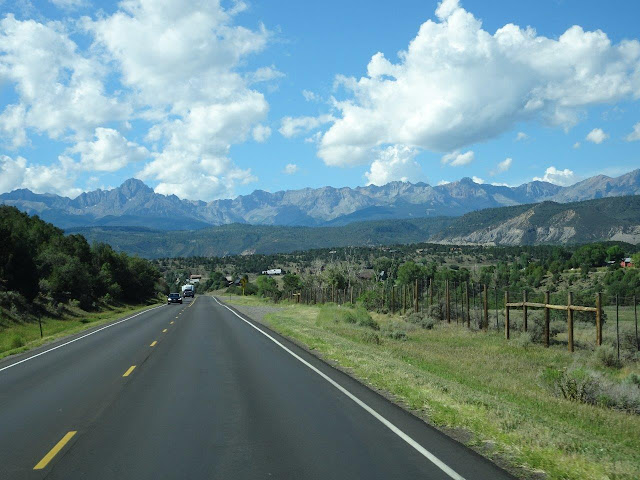 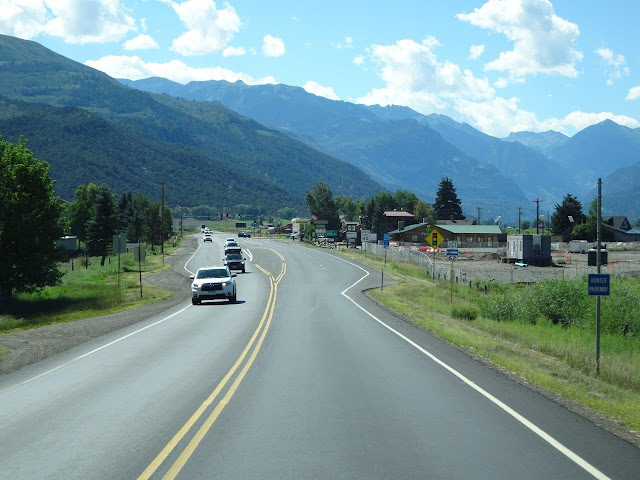 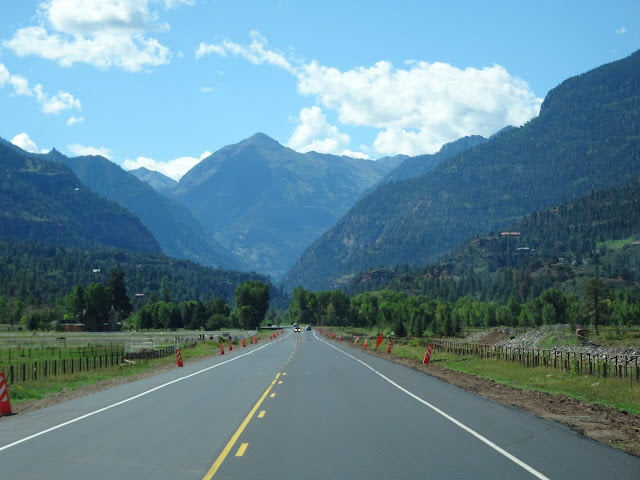 Ouray is about 20 miles from my campground.  The tricky part was that this town's main street is entirely angle parking because the main street is not level.  Angle parking helps cars from slipping downhill and hitting other cars. 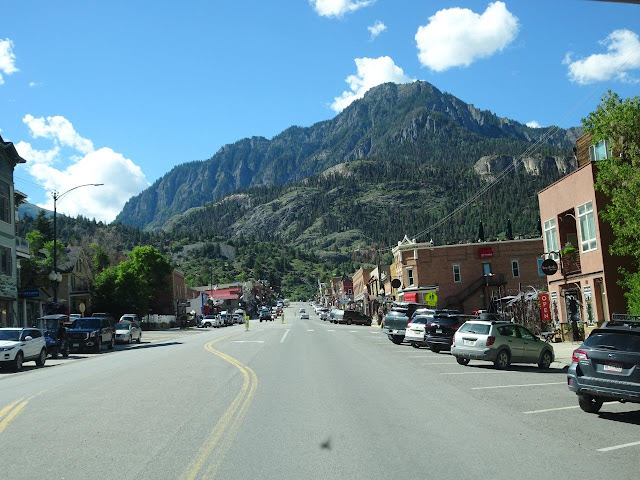 So, I had to find a side street.  You cannot really tell from this photo, but this street is on a hill, so I parked my rig so that if it slipped out of park and the emergency brake did not hold, it would hit the curb instead of rolling downhill. 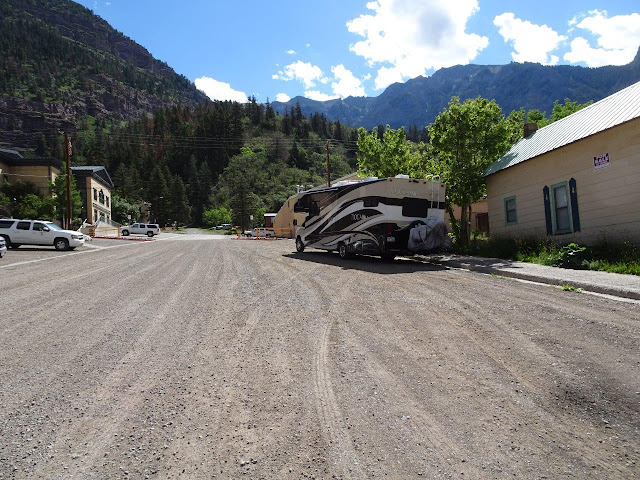 Next few photos are of main street of Ouray.  Lots of gift shops and restaurants for tourists. 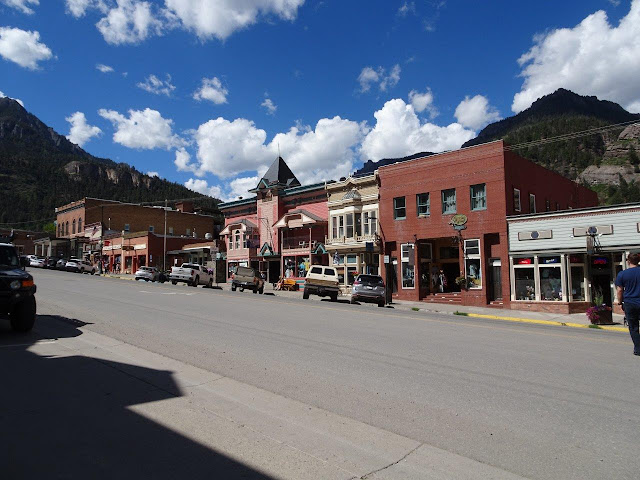 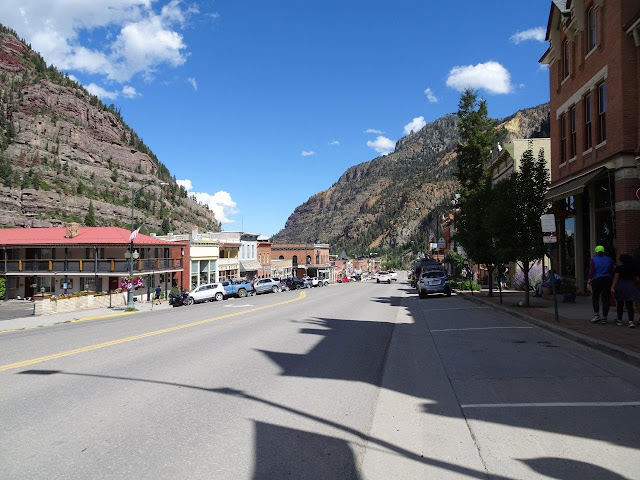 Just south of town, the Million Dollar Highway begins.  It was named for the amount of gold that remained in the roadway's fill or for the million-dollar views.  Some people, however, say that it was named because a lot of people would not drive it again for a million dollars! 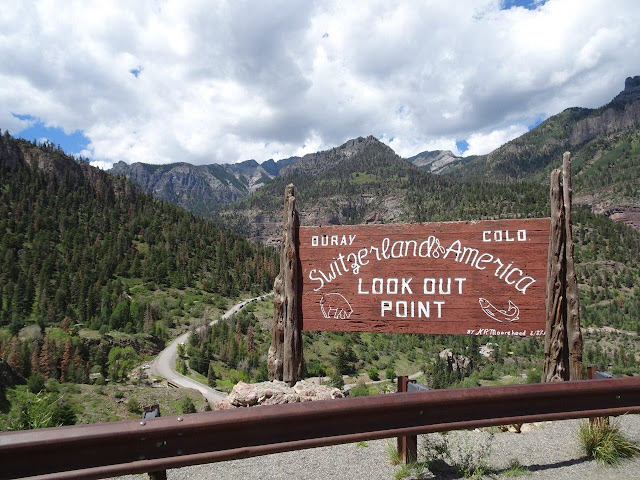 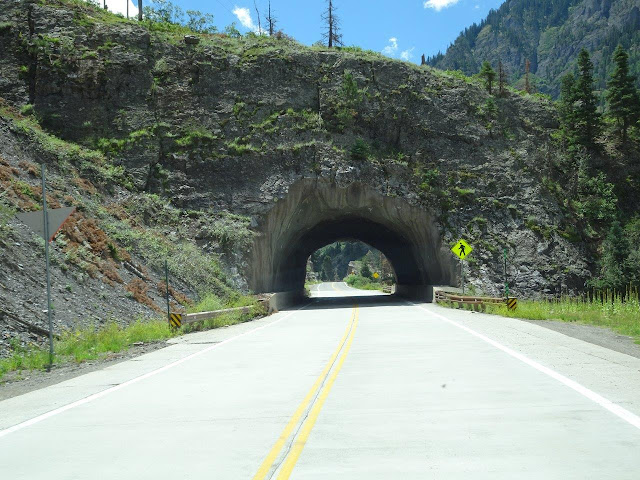 Check out the steep drop on the side of the road.  Best to drive this in daylight and in good weather.

Luckily, the speed limit along most of this highway is only 25 - 45 MPH, so it was relatively easy to drive and stay in your lane.  Some sharp turns had a 10 MPH speed limit! 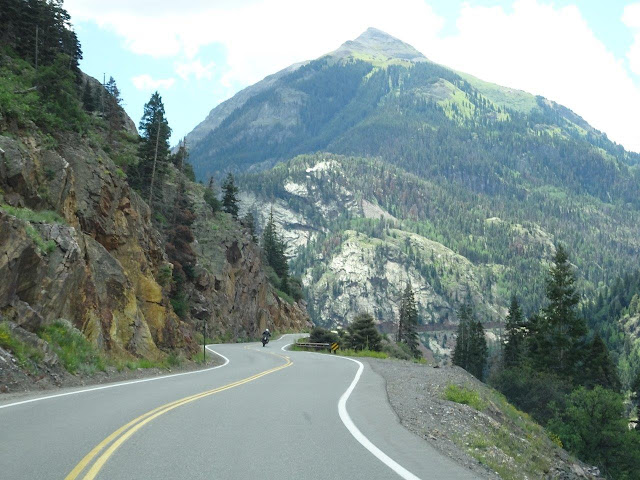 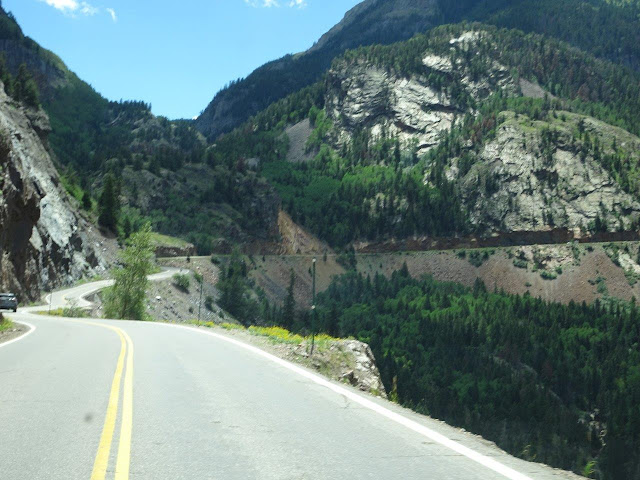 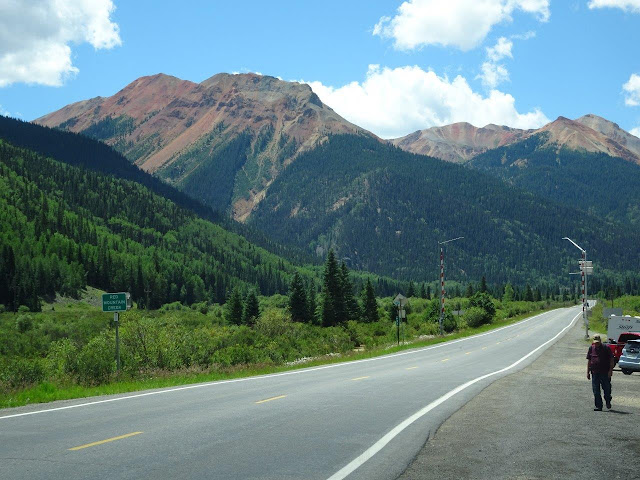 I pulled off into one rest area and was able to chat with some bikers.  One couple were on a three-wheeler, along with their very small dog who had his own vented carrying case on the back!  I peeked in, and it looked comfortable and safe.

This is the view of the mines in the area, but they really need to cut some of these trees. 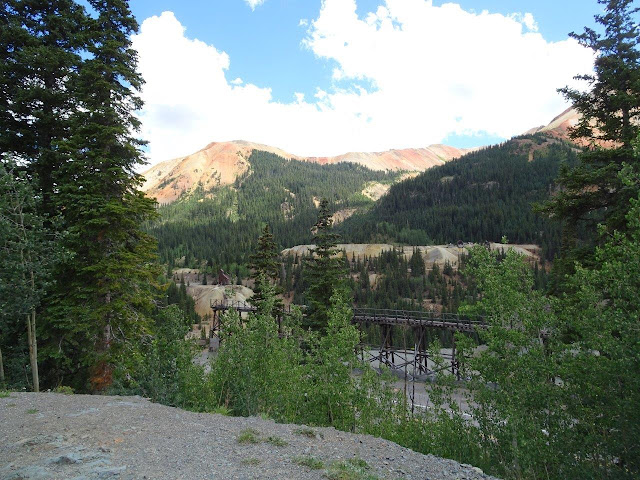 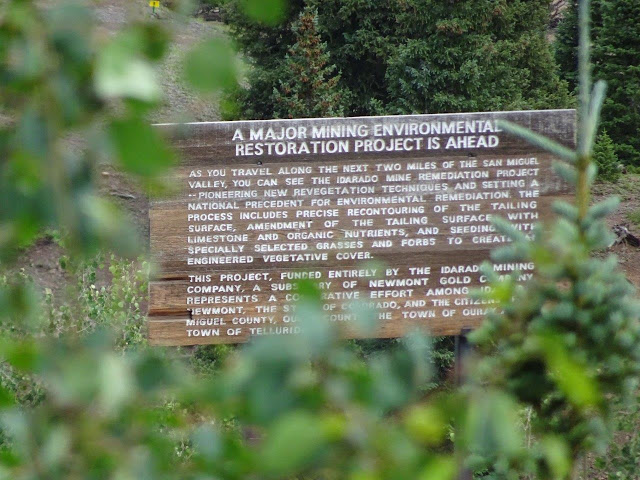 Pretty little valley and ranches in the distance. 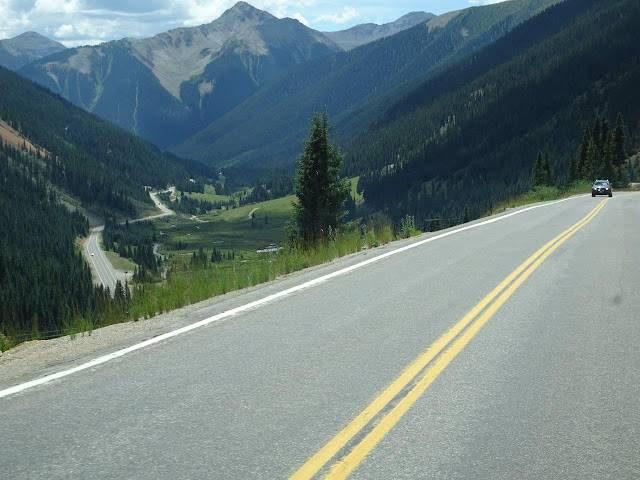 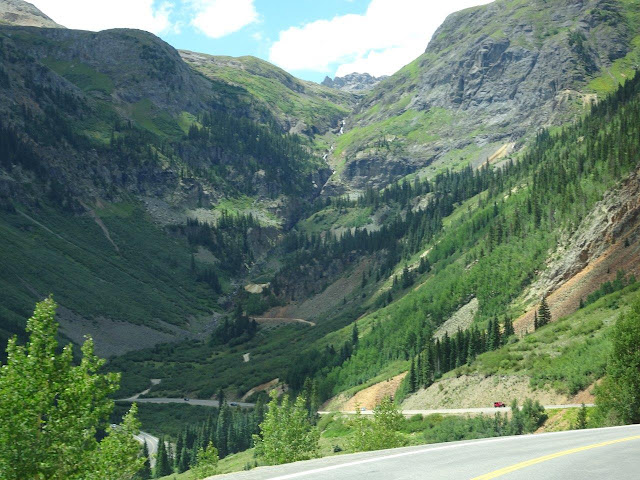 Arrived in Silverton.  This is the back end of one of the trails.  There will be a steam engine at the front, but I did not feel like walking all the way down there.  I have taken this train three times.  I enjoyed it, but the drive was prettier and a lot less smoky! 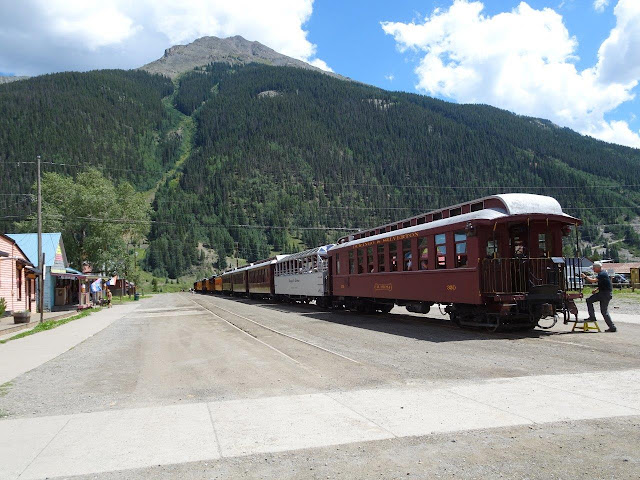 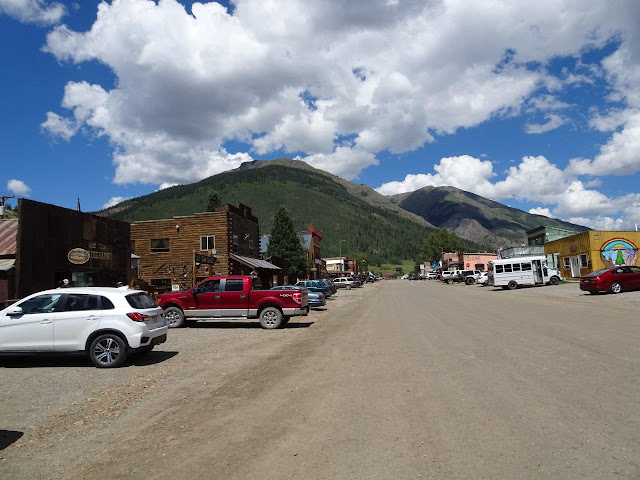 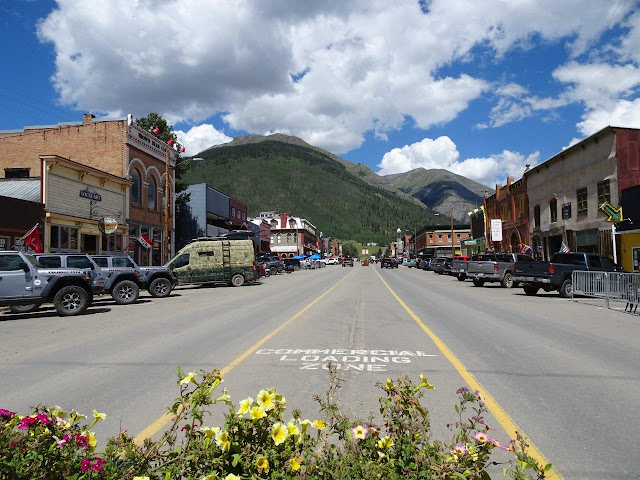 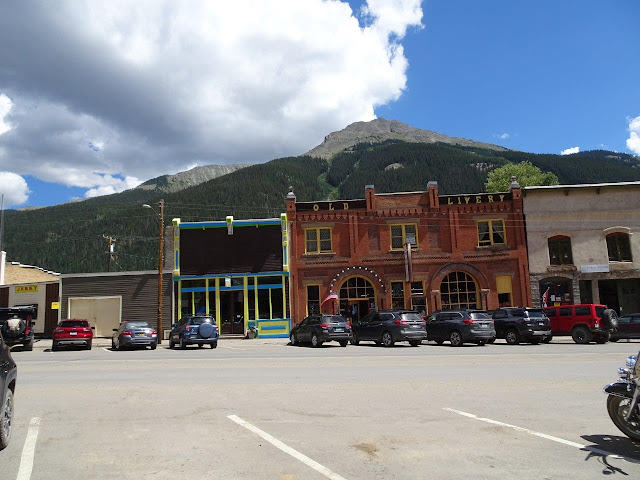 An interesting old hotel. Mostly, I just wandered around town for an hour and had a hamburger at one of the restaurants. 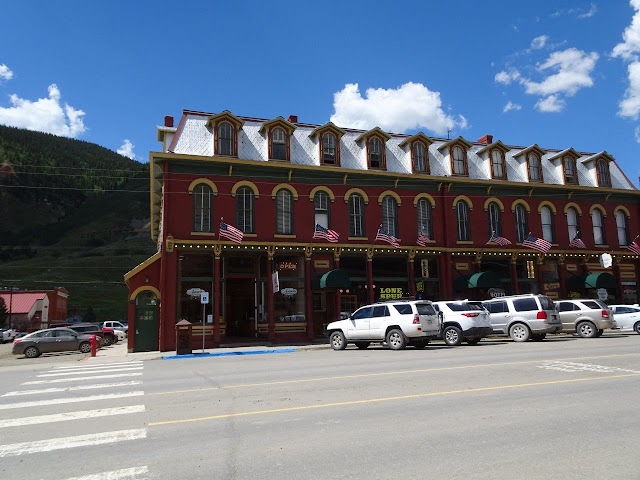 Headed from Silverton to Durango.  Road is not quite as scary as portion from Ouray, but still lots of gorgeous scenery. 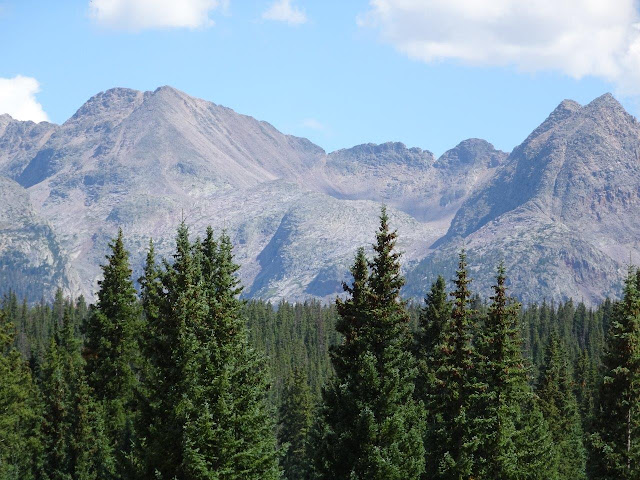 It was nice to have some flat highway for a change with slightly higher speed limits. 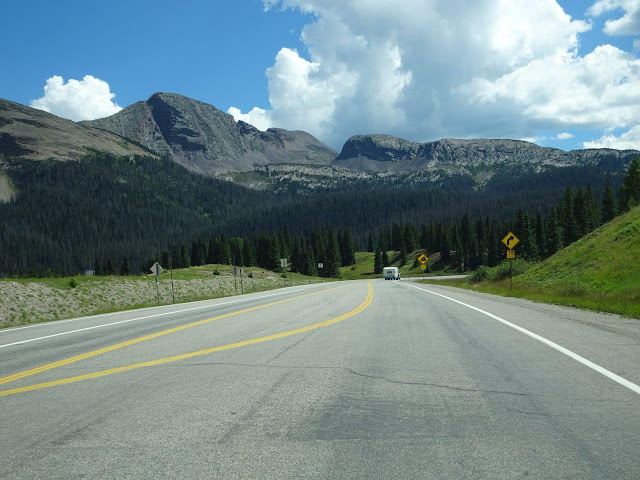 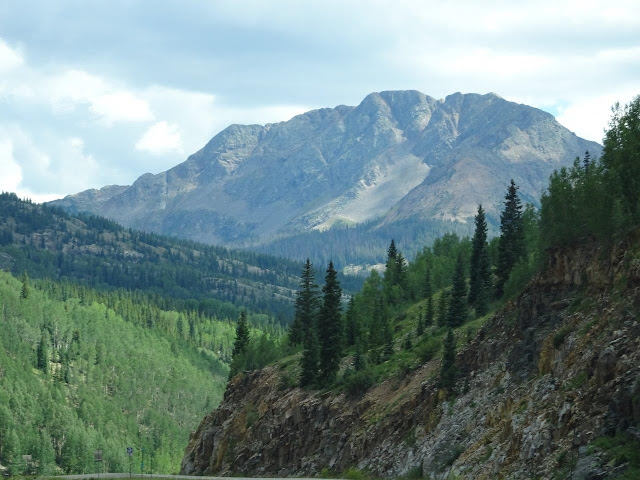 I stopped taking photographs as I got closer to Durango and the road flattened out, but I knew I had to find a grocery store to pick up a few items as I would be heading to a very small town for the next couple of nights, and then onward to an even smaller town for the next night.

Posted by Grandma on the Road at 2:19 AM