6/19-21 Drive Through Nevada and More Trouble

So, here is the rest of my story of troubles.  First, after my first set of repairs I drove fast and made it out of California and into Nevada.  I spent Monday night just east of Reno.  The Sierra Nevada mountains are always beautiful. 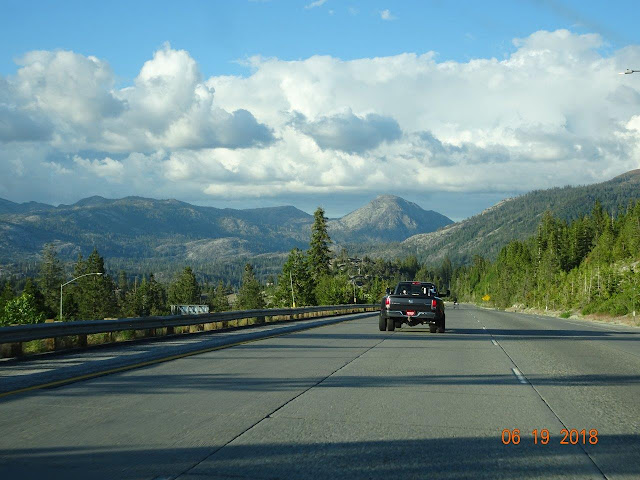 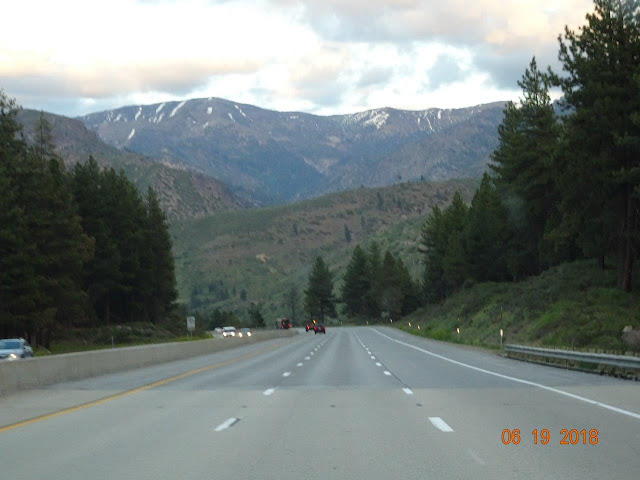 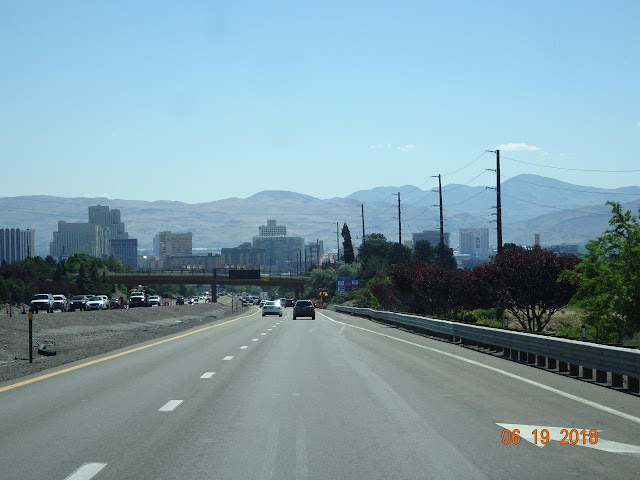 Continued east along I-80 and spent the next night in Elko, NV.  Very little traffic and great weather--not too cold or hot. (The dates on some of my photos are wrong.  Need to fix my camera.) 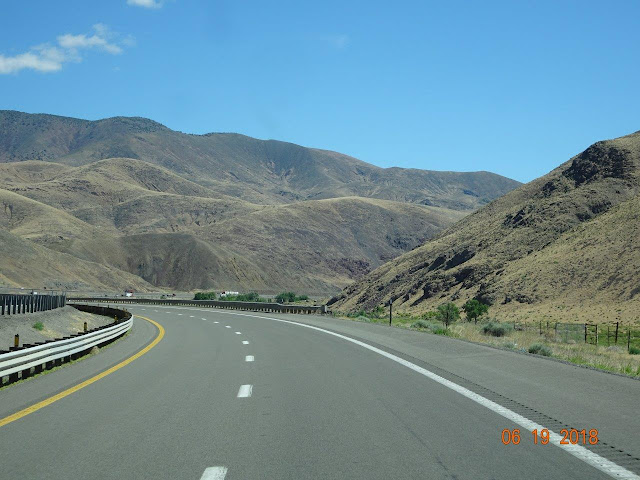 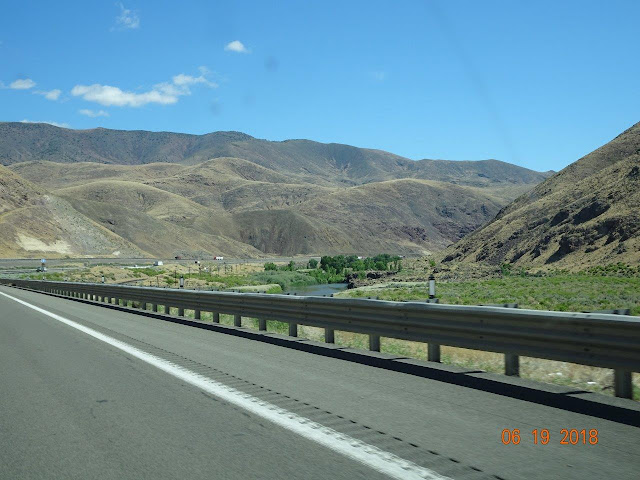 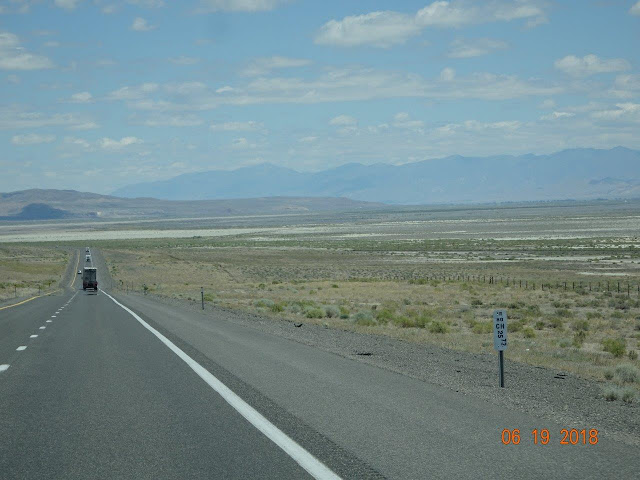 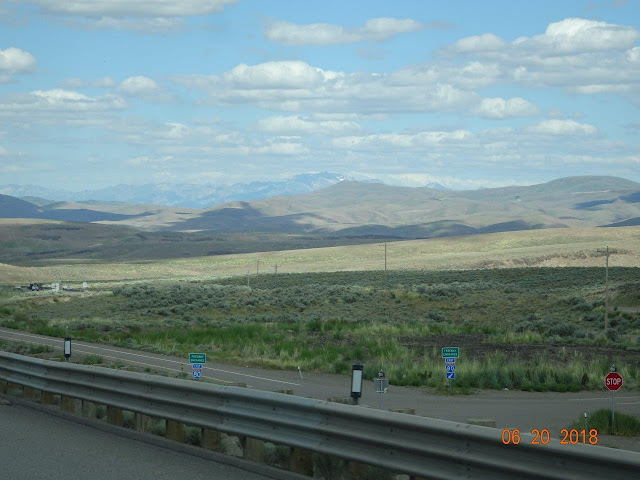 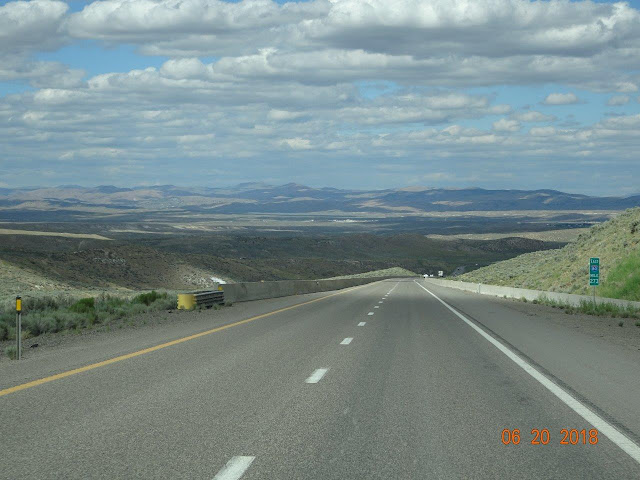 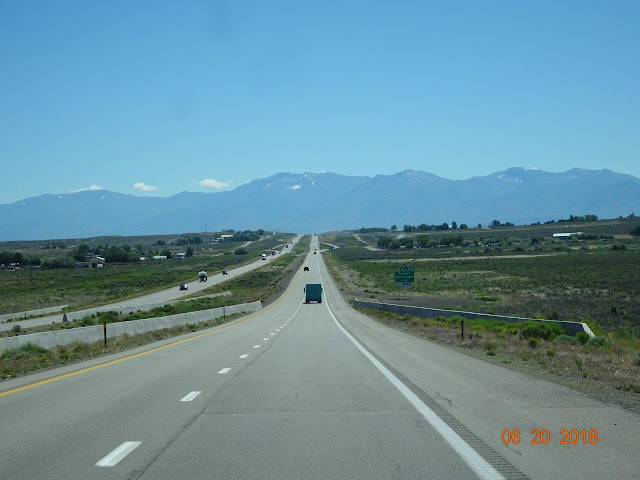 This is an animal bridge, by the way.  There are more of them popping up all over the country because they encourage animals to cross freeways safely.  They also prevent car/animal collisions. 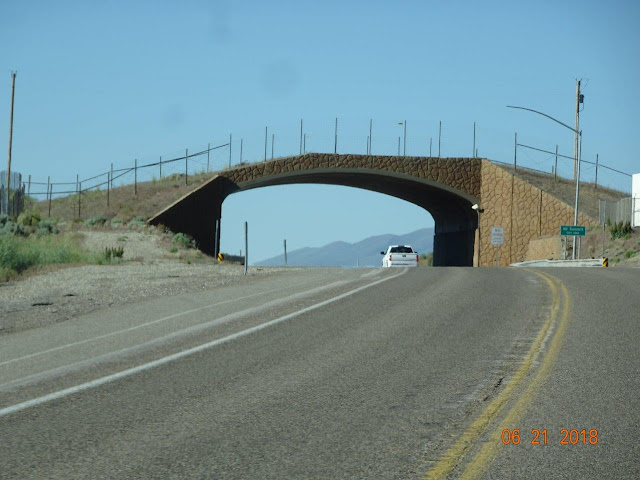 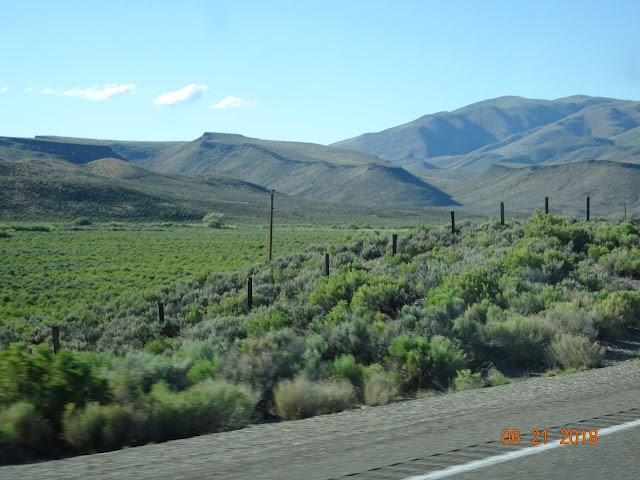 I spent Tuesday night in Elko Nevada.  On Wednesday, I headed to Twin Falls, ID and the RV park I had reservations at for two days.  However, in the morning, near Wells, NV, I hit a big chuckhole in the freeway and then felt a lot of vibration.  Vibration can be just the pavement or it can be a warning of another blowout, so I pulled over and looked at my tires and they looked OK, so I drove slowly to the next town, Wells.

I found a tire shop and asked the technician to please check my tires because I was nervous of another blowout and there was nothing between there and Twin Falls.  Tires were OK, but while he was under there he told me one of my shocks was hanging loose. 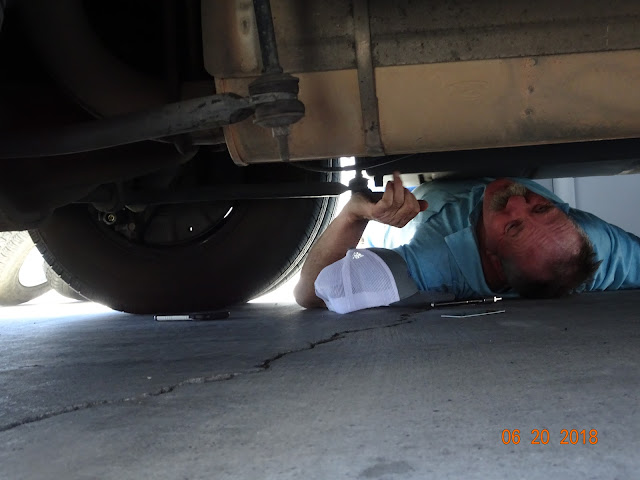 I have never had my shocks changed in 116,000 miles and have asked a couple of times that they be checked, but have always gotten a vague "Oh, they're fine" response.  I do know that hitting any kind of bump has been harsh for quite a while.  So, since they promised me they could install four new shocks in two hours, I went for it.  Unfortunately, they had problems getting the old shocks off, and it took five hours.  He did show me the old shocks and there was almost no give at all in them, so they did need to be replaced.

Cost = $600, but they threw in a front steering shock of some sort because it took so long.  This makes a total of $5.600 spent in RV repairs and tires this year!  I will have to put myself on an austerity budget and hope nothing else breaks.

I made it to my next RV park in Heyburn, ID. just before dark, where I was happy to spend two nights to recover from my long drives and stress of repairs.

Posted by Grandma on the Road at 9:09 AM No comments: 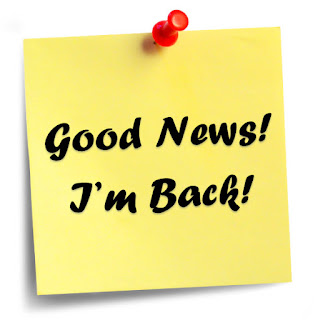 Actually, I've been back from my long trip to the UK for over a week, but the first week, I was very tired from an 11-hour plane ride and had a lot of unpacking and putting stuff away to do.  I also had a lot of resting to do and wanted to spend some time with family and grandkids.

Finally, I was organized and ready to move on, so tried to leave California on Father's Day Sunday.  Unfortunately, California had other ideas, and a tire blew along an extremely busy section of I-80.  I don't know if I hit something or if there was something wrong with the tire, but I had been in the tire dealership buying two new tires for my front wheels just a few days before.  Supposedly, they checked all my tires.

Luckily, I have a specialized road service for motorhomes called CoachNet.  I called, and they sent out a truck and a guy who took off the old tire, which was a driver's side inner dually, and put on my good spare tire.  Anyway, this is an impressive blowout! 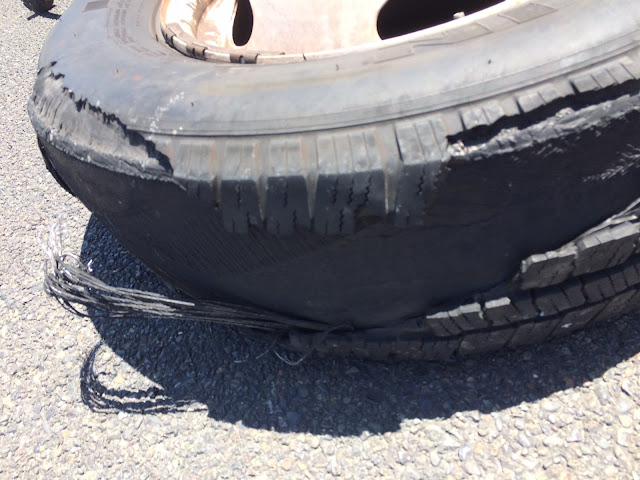 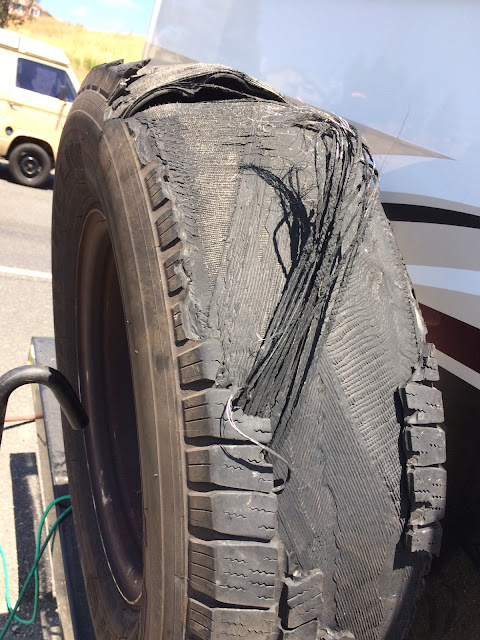 What I did not take photos of was the damage I noticed as the guy was changing the tire.  All the tread coming off this tire caused some damage underneath: a wiring bundle handing down, the wheel well mud flap was rubbing against the tire, and the gas cap was broken off and the filler tipped slightly out of alignment, but it looked driveable, and I figured I could have all that fixed the next day.

The service guy got me all set up and then headed off.  Unfortunately, my tire was only part of my problems.  I had left my emergency blinkers on for two hours while I waited for the service guy to come and change the tire.  When I tried to start my engine, the battery was completely dead.  Even running my generator and using my emergency start did not help.

So, another call to CoachNet.  This time they sent a truck big enough to tow my vehicle.  Because it was Sunday and getting late in the day, there were no truck places open to get me a new battery and check underneath to see what other damage there might be.  By the time the truck arrived, I had spent about four hours along the highway!  Luckily, I have a generator and was able to turn on the air conditioning while I waited.

Here is the truck backing up to attach my vehicle. 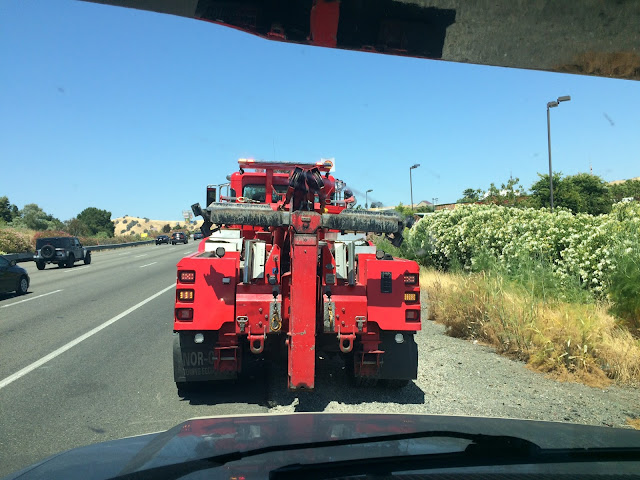 CoachNet had called the Lowes at the next exit and had gotten permission from their management to have me and my vehicle to spend the night in their parking lot.  Fun.  Here is my motorhome being towed around the parking lot so the driver could drop me in a good spot.  CoachNet promised to send another tow truck the next morning to take me to somewhere to get a new battery and check underneath.

This is the back of my motorhome as the tow truck slowly circled the parking lot to get into the right position to drop it off. 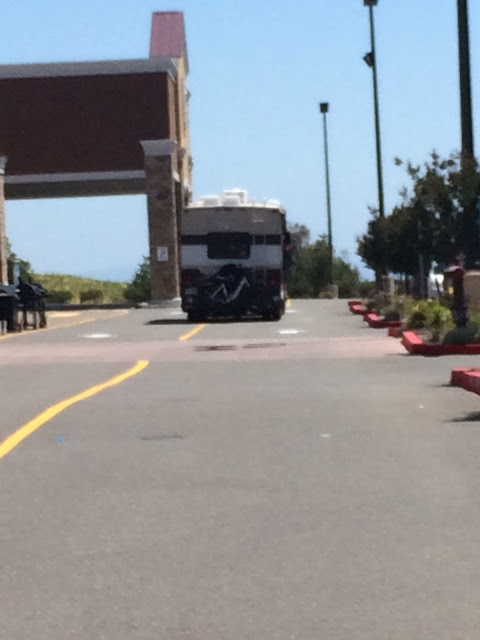 Got to admit, this is an impressive truck! 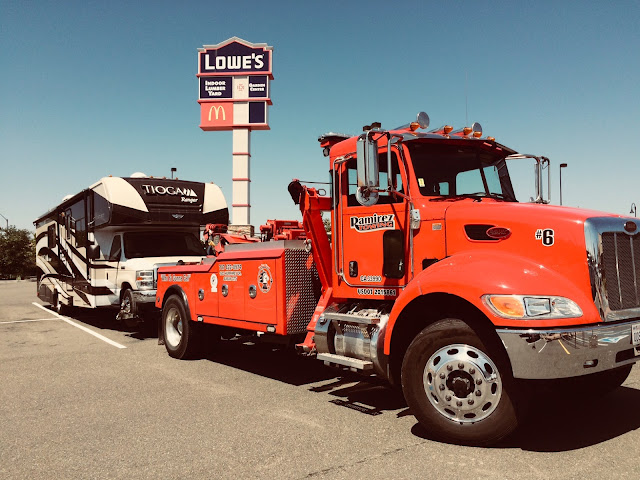 After I got dropped off, I discovered that I had no water in my fresh water tank.  The indicator lights showed an empty water tank, and when I turned on the water pump, it spit out a little water but mostly air--typical of an empty tank.  Really bad news, because replacing or repairing a water tank is expensive and very difficult.

To make it through the night, I grabbed my two gallon-sized emergency water jugs and went into the Lowes garden center. They filled them both up for me, and then I headed into the store to buy some bottled water that they sell.

I could not put my slides out, but with good house batteries, some water, a refrigerator full of food, and my generator, I was good for the night.  I did not sleep well because I kept trying to think of how I could manage without my fresh water tank and was worried about the black and grey sewage tanks.  They were empty when I started out that day, but I was on my way to meet other family members in Yellowstone, and really did not want to have to deal with all these repairs.  Plus I had paid reservations for that night in Reno and two other stops on my way to Yellowstone.

No more photos, but the next morning it was late morning before the second gigantic tow truck arrived.  Just before it came I noticed that my vehicle battery was showing a charge, probably due to running the generator that morning for a couple of hours.  Anyway, I was able to get it started and followed the second big tow truck to the truck service center.

To make a long story somewhat short, I spent until 5:00 p.m. that Monday afternoon in a waiting room while they put in a new battery, found a new tire to replace my spare, fixed the gas filler neck and found a new gas cap, fixed two broken wires and tied up the wiring bundle and tacked the mud flap back in place.  Total bill was a painful $900.

Headed out and drove 162 miles to a casino just west of Reno just before dark.  Luckily, it was full hookup, meaning electric, city water, and sewer hookups.  At least I would be able to take a shower.  Hooked everything up, went inside, and checked my indicator panel.  What???  There was now half a tank of water in my fresh water tank.  A miracle in the desert????

The only thing I can figure out is that a wire on the indicator panel had been one of the two that had been broken and repaired.  Whew!!

I will write about Part 2 of my travails tomorrow.  Just know that I am writing this very late on Thursday and am safely in Heyburn, Idaho, in a very nice campground.  I arrived late last night and spent today resting and organizing stuff.  Beautiful drive and nice weather.  Going to make it to Yellowstone after all.