No, unfortunately Cedar Point Amusement Park is not open, but I am in finally in Ohio visiting my younger son and his family, so he took me for a boat ride today.  The only part of the park open is the marina, so it was nice to ride past it and at least see some life there.

This first photo is of the park from Sandusky Bay. 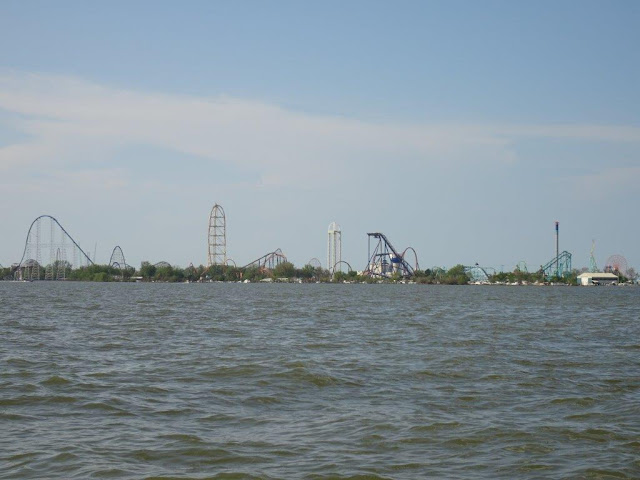 Lots of roller coasters, but nothing moving. 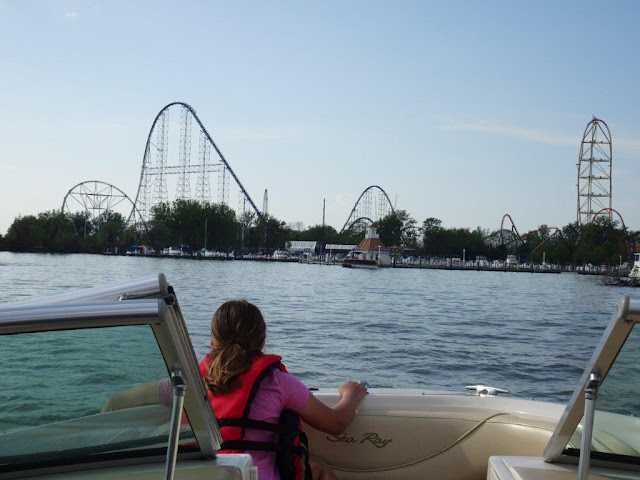 And the view from the marina.  The marina was the only place where there was any activity.  In the background is the Power Tower, 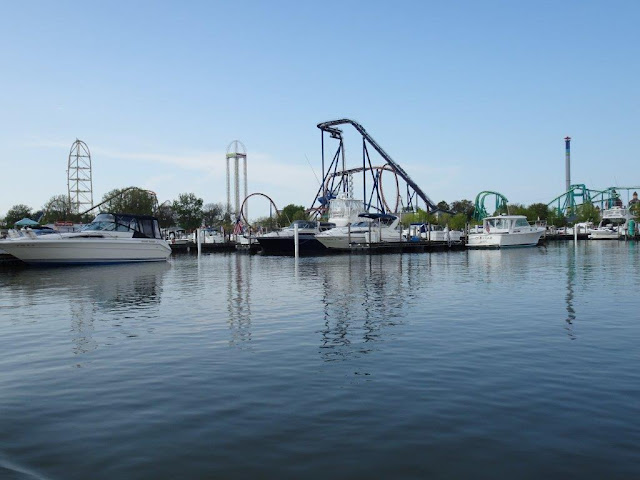 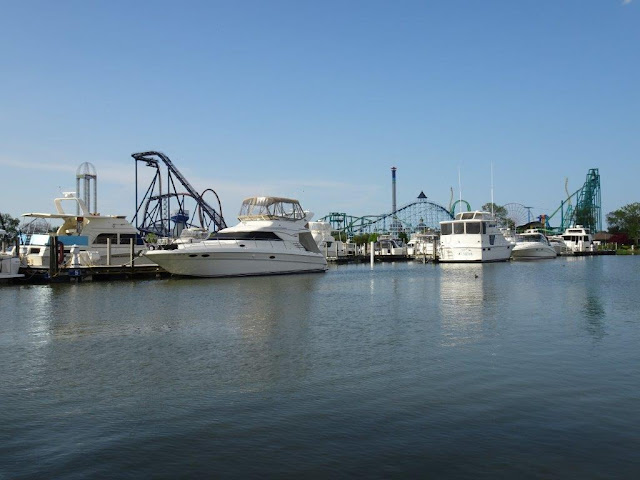 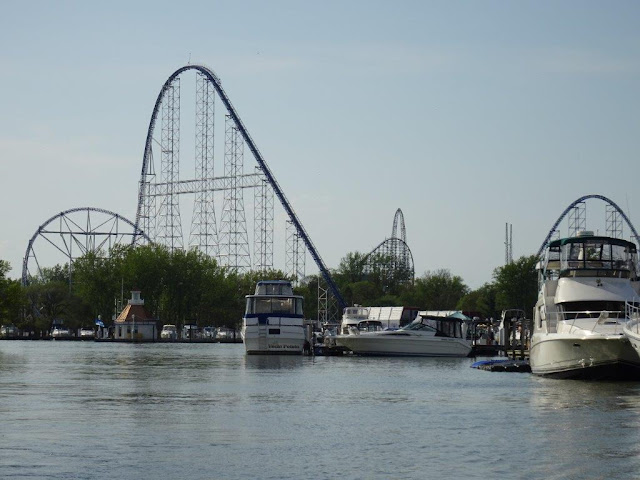 Having trouble identifying the rest of these. 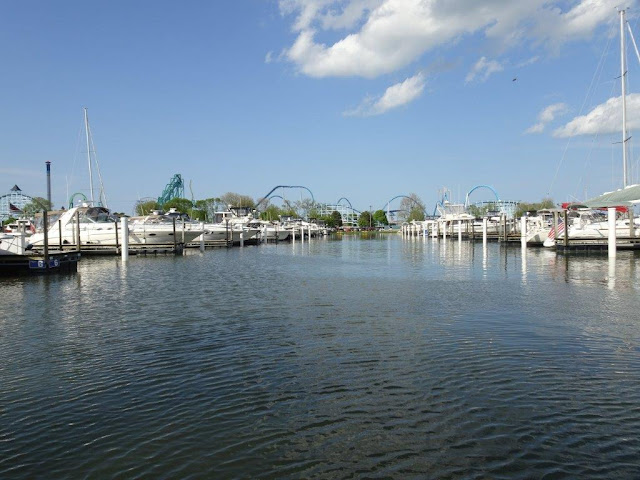 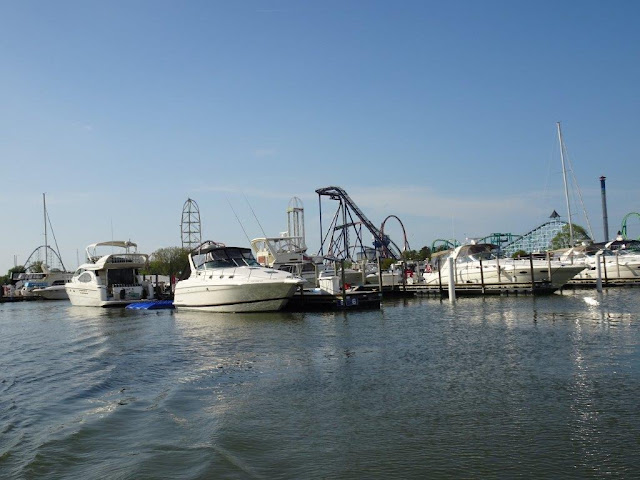 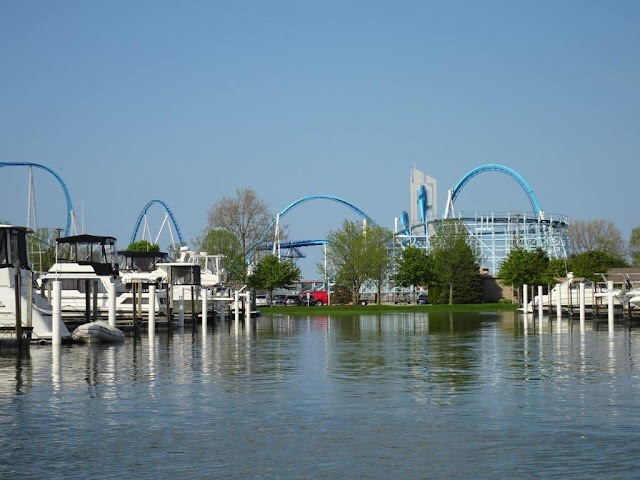 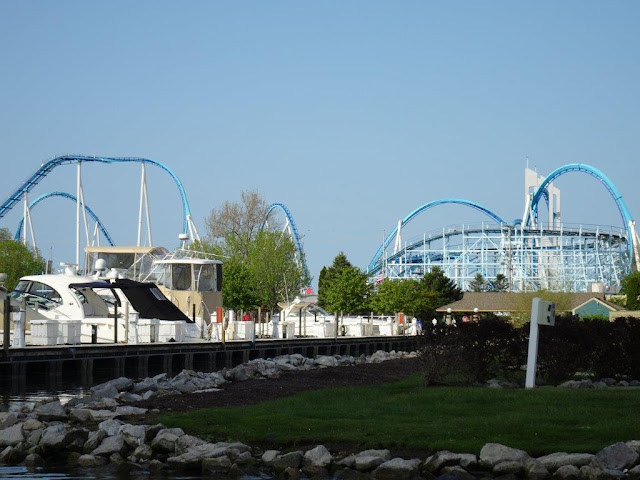 Leaving the marina and Cedar Point. 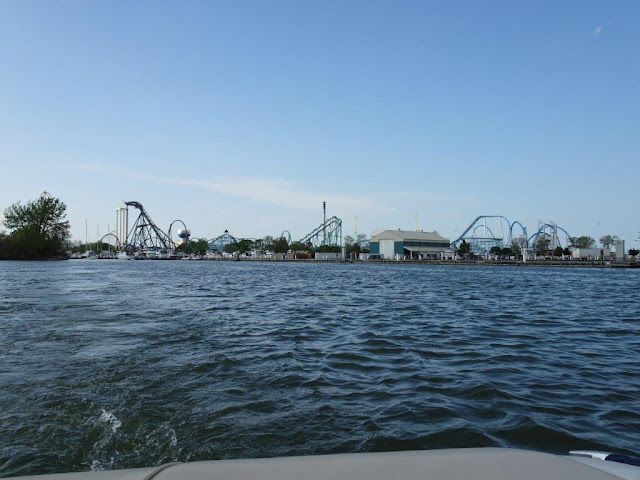 By the way, because Lake Erie water level is so high, there is water lapping up on the parking lot.  Hopefully, it will be lower by the time the park opens this fall or next spring.
Posted by Grandma on the Road at 7:56 PM No comments:

Nothing else to write about, so I have decided to share some of my Covid-19 musings and concerns.

First, there are some real advantages in living as I do, alone and in a motorhome full-time.  The biggest is that I do live alone and so am not exposed to a lot of other people as I might in a condo or apartment complex.  I have been shopping for groceries once and week and that has been about it.

Also, I can move away from an uncomfortable spot.  While I was evicted from the Florida State Parks I had reservations at, there are still lots of commercial campgrounds open.  However, since I am very picky about where I stay, it has not been easy.  I was lucky in that George state park campgrounds are still open, and I was able to stay there for more than a week.

I stayed a month in two commercial campgrounds in northern Florida, although one of the two had a lot of kids and families who were not taking the social distancing rules seriously.  The second one had mostly couples who were snowbird refuges, just like me, waiting for it to warm up and get less dangerous up north.  The reason I chose northern Florida, however, was that it had very few virus cases and almost no deaths.  One county had only two cases and the other had 8 when I left after two weeks.  The county where the Georgia state park was located was also rural and had less than 10 cases.  (I just checked, and it now has 17 cases, but that is not bad compared to most other places.)

The disadvantages are also many.  The big one for me is that I have little extra storage space, especially for groceries.  My refrigerator and freezer have a total of 8.5 cubic feet of storage, so stuffing in an extra half gallon of milk is impossible.  I am afraid I will need groceries if I get sick, so my freezer and my refrigerator have been spitting packages out every time I open one of the doors.  My choices for a meal are limited to what takes up the most room or has the least shelf life.

Another big issue is my lack of ability to get mail delivery. And even if I could, staying 7-14 days in one place means someone has to send me something early enough so that I will still be here to receive it.  And I am not going to be back in Ohio at my son's house until May 22.  My big need right now are some face masks.  I cannot make them easily, and while a couple of people could send them to me, i can't get them until May 22.  I can't buy them in stores, although I did buy a nylon headscarf, but it keeps falling off and is really not right.  I am really getting frustrated, so am going to call around to medical supply places or drugstores tomorrow to see if I can get some disposable ones.

Also, it is hard to get things fixed without someone coming into my home on wheels, which I really do not want to permit.  I did get a new water pump for my motorhome about five weeks ago because Camping World agreed to install it in their parking lot.  But, a month ago, my toilet was causing me problems, and it is really hard to do without a toilet, so I had to have a mobile RV repairman and his daughter come inside to fix it.  And, yes, it was actually the 16-year-old daughter-in-training who fixed my toilet!  I used Chlorox wipes on all surfaces after they left, even on the bathroom and hallway walls.

Right now, my porch light has been burned out for the past three weeks.  I got a replacement, but the Camping World in Georgia wanted to drive my vehicle into the shop to replace it, so I said no thanks, and left with just the porch light.  It's not an emergency, so I will have to wait until I get to Ohio to get it installed. It would be nice to have an outside light, however.

Another problem, is that I have somehow lost one of my two mobile hotspots.  I have searched everywhere, but none of the Verizon stores within 250 miles have any in stock, and they are on backorder, so I am making do with fewer gigs of service, again until I can get one sent to me in Ohio.

I cannot to back to Ohio right away, by the way, because there state parks do not open there until May 17, and I cannot stay legally in my son's driveway because of subdivision regulations.  It's also a little chilly there right now, so am just hanging around Tennessee for the next couple of weeks.

Luckily, I have not been affected financially because of the coronavirus.  I have my social security and have been teaching college classes online for the past 17 years, so I can still do that just as I have been doing it.  And I am still healthy and in much better condition than a lot of people my age, so I am very thankful for that.
Posted by Grandma on the Road at 6:18 PM 3 comments: