Bandelier National Monument is located in a mountain and series of canyons in Los Alamos, NM, but it is a strange place because in order to get to the monument, you have to drive up some steep roads past a lot of government facilities.  Los Alamos is where the atomic bomb was developed, but it now has a lot of government groups that search the universe for life and monitor electronic transmissions from who know where.  If ET wanted a place to land, this might be where he would choose!

Anyway, since the Bradbury Science Museum, the Manhattan Project Museum, and the National Museum of Nuclear Science and History were all closed, and the Los  Alamos National Laboratory was not offering tours, I decided to see how the ancients lived, before all these museums were in existence!

I spend three days here in the campground, but got tired of not having any power, so headed down to the White Rock VIsitor Center RV lot.  Yes, I have parked in some strange places, but this place is cheap and has power, plus a water fill station and a dump station.  Normally, there are shuttles leaving the visitor center for Bandelier and other places in town.  It also has a grocery store and a couple of restaurants across the street, as well as a bus stop in front.

This is my no-power campsite in Bandelier.  I was lucky to get one of the very few spots big enough for my motorhome.  Very pleasant, but was having problems charging my laptop. 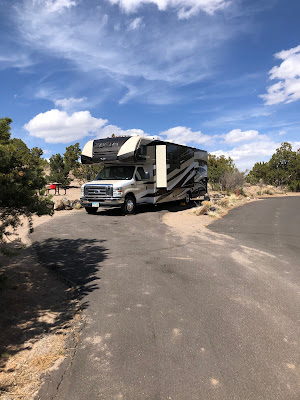 This is the camping area next to the visitor center.  Did I mention these were the only two places to camp within 20 miles? 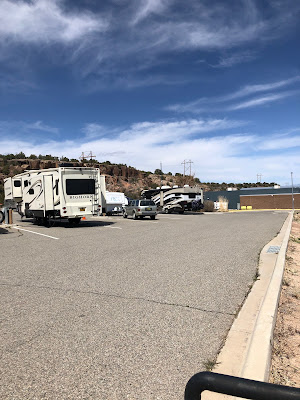 Bandelier National Monument is interesting because the ancient people lived here in two ways--in a pueblo built of stone in the flat area near the river and in homes dug out of the soft cliffs.  It is at about 7,000 feet, by the way. 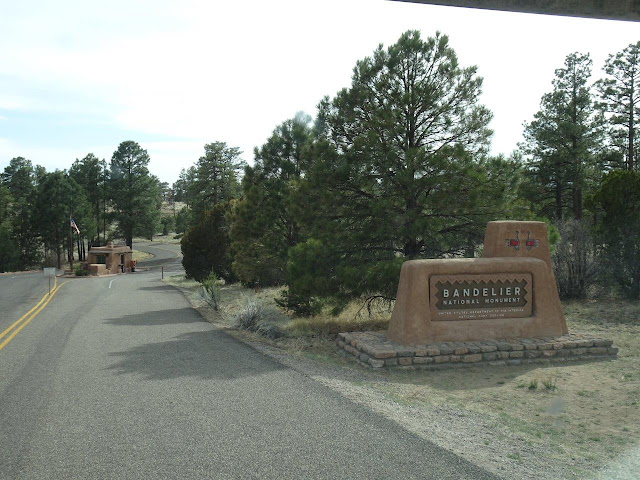 The visitor center was closed, but they had a ranger on duty who had lots of pamphlets available and was able to answer questions.  There was also a book/gift shop that was privately run that was open. 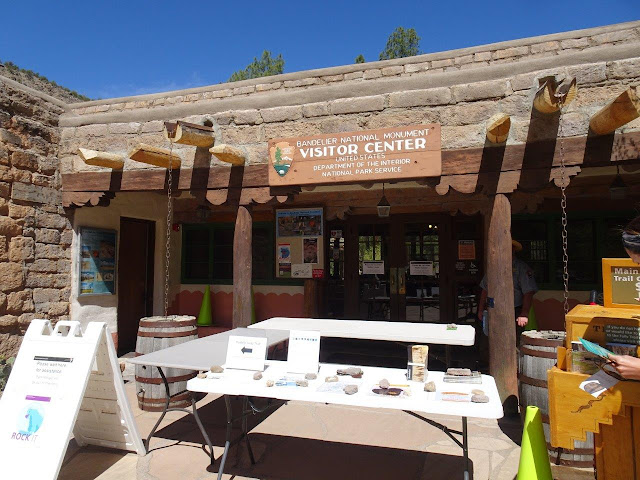 There was about a quarter-mile paved trail to the ruins. 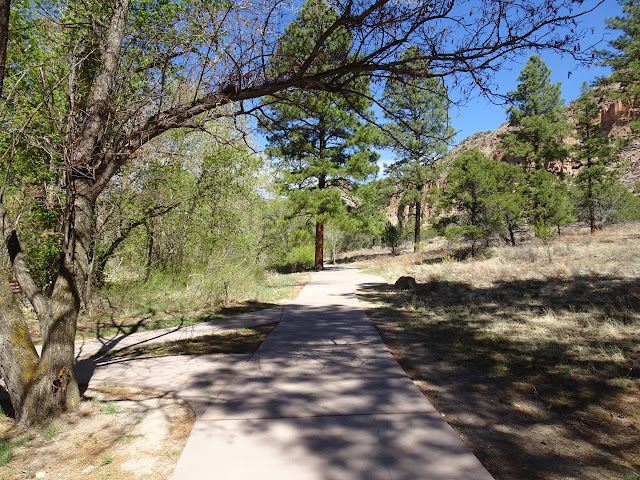 This was the cliff where there were holes dug out of the soft stone for homes. 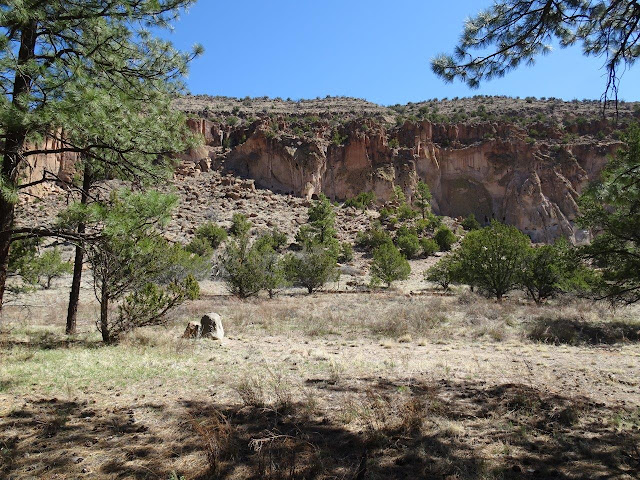 If you look closely, you can see some pictographs on the walls of one of these homes.  Some of the smaller holes were dug out and used as storage. 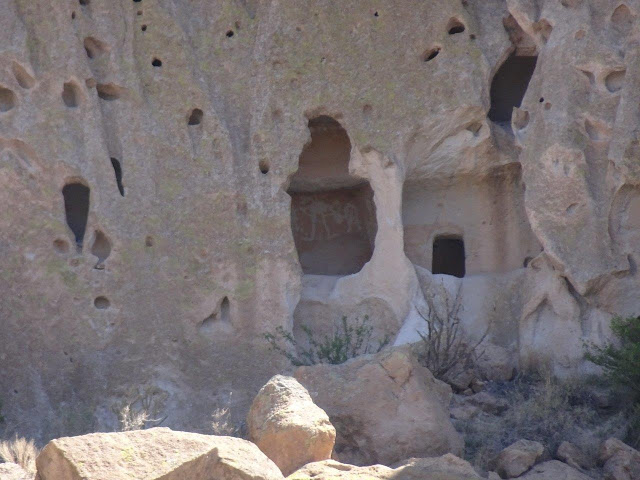 Here is a kiva, or ceremonial dwelling, next to the pueblo or village.  Every ancient Native American village had one or more of these used for religious or other ceremonial purpose. 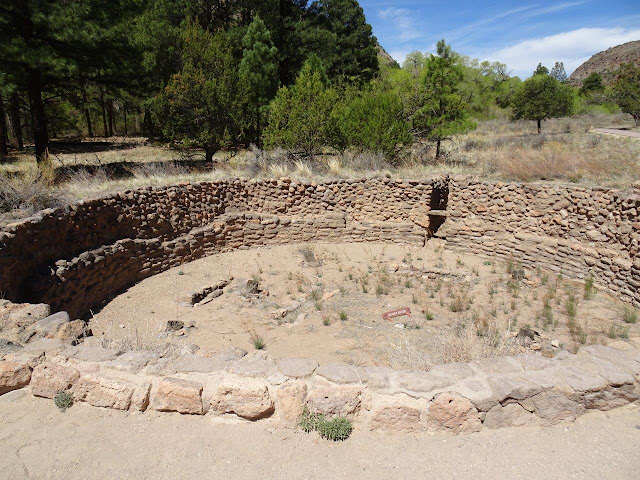 You can tell the homes from the natural holes in the rocks by the rectangular shape.  They no doubt used existing holes and just dug them out more. 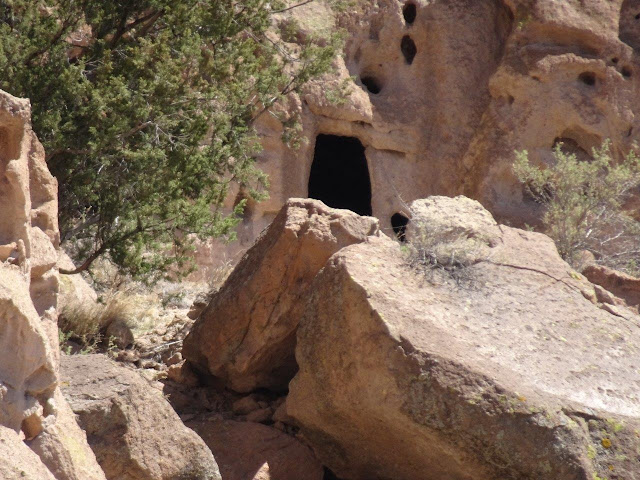 Next couple of photos show the pueblo or village of homes built on the flat land.  One big advantage of this location is that it was much closer to the river.  They no doubt had gardens and used the river for irrigation.  The path heads to the cliff and goes up among the homes built into the rocks. 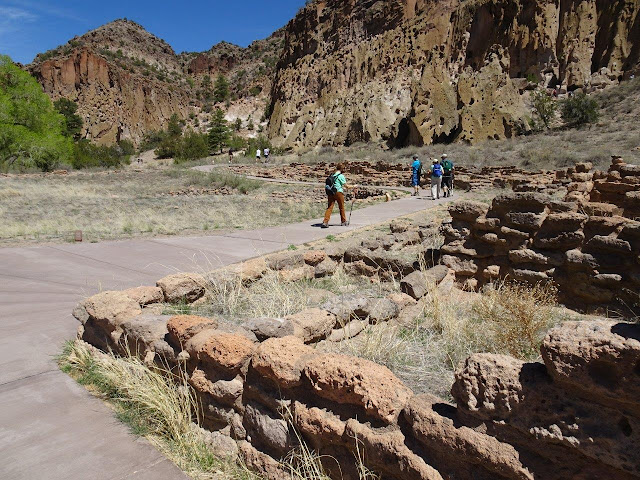 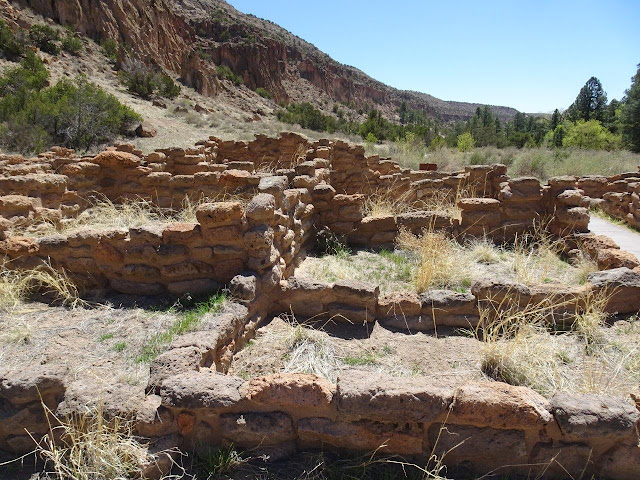 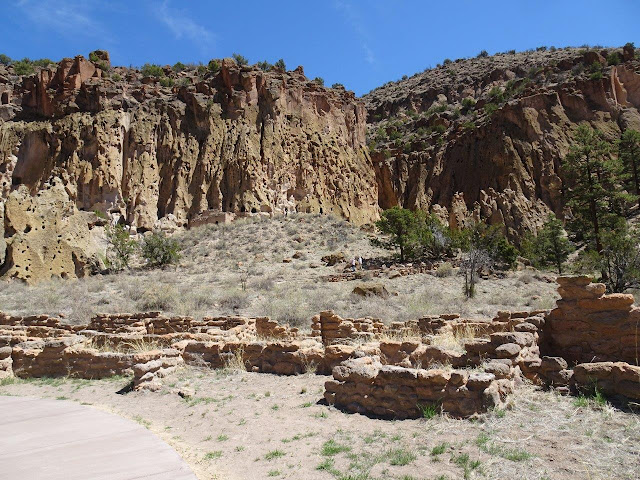 Here are several of the homes with ladders you could use to climb up to see inside.  No doubt the ancient peoples also used ladders they could pull up at night. 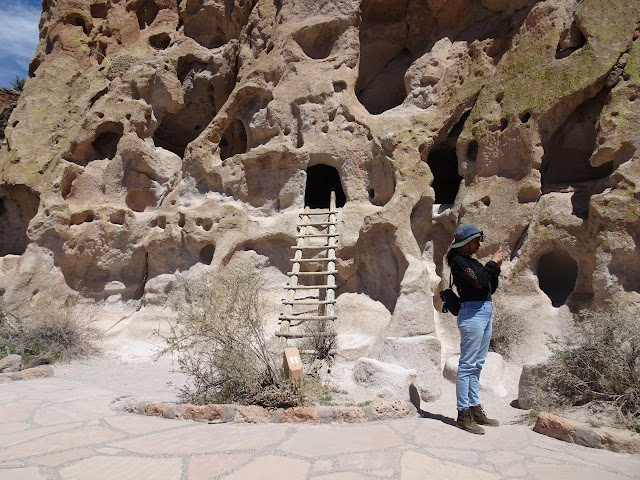 A view from the cliff homes of the village below.  As you can see, these were so close that it is likely these were both part of the same extended families. 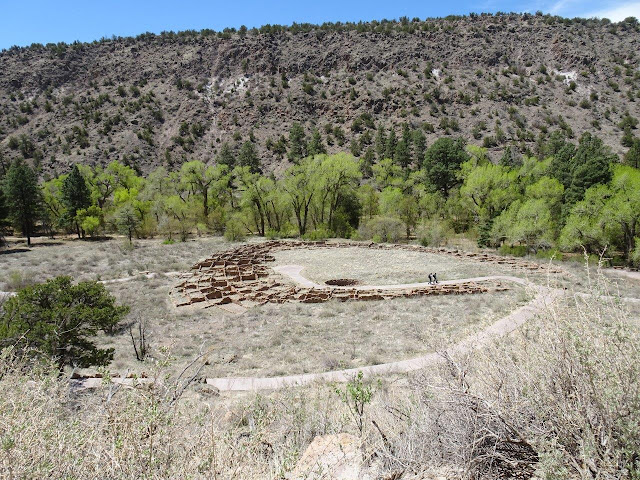 A view inside one of the cliff homes.  This one has a second room in the back and also a second story. 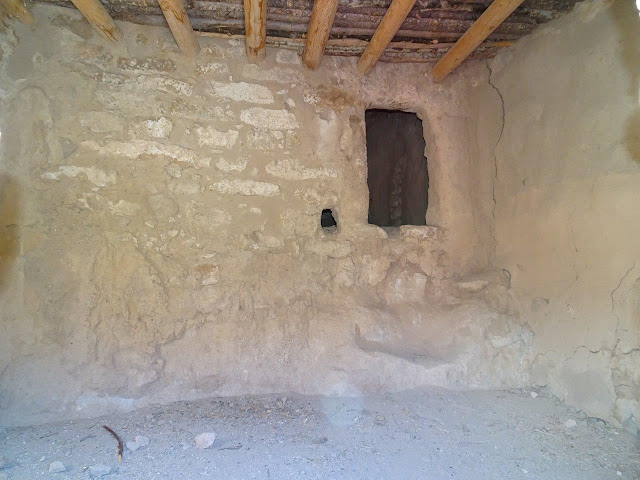 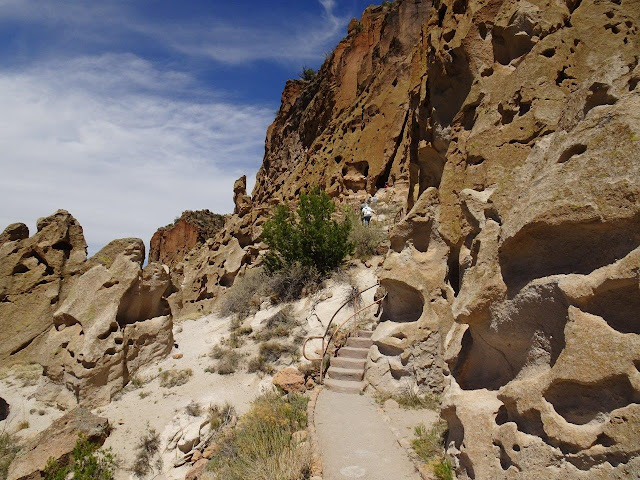 Luckily, it was a cool and breezy day and I had brought water along.  Would not have wanted to do all this walking in the heat!! 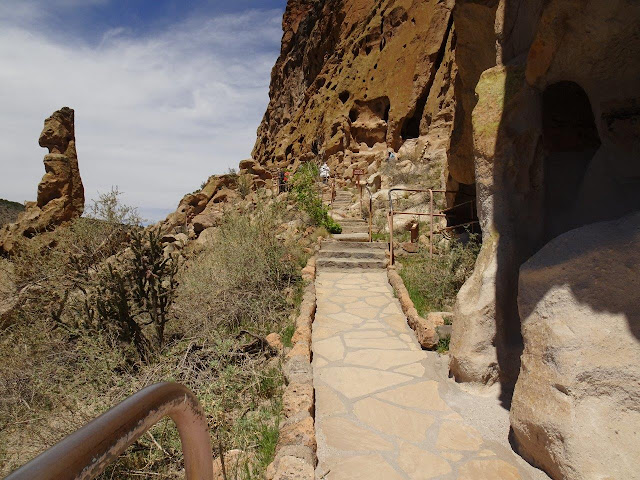 You can see from the soot on the roof of this one that they had fires for warmth in here. 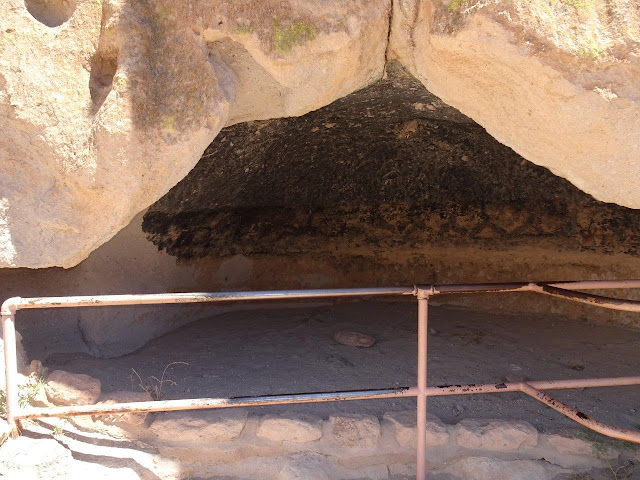 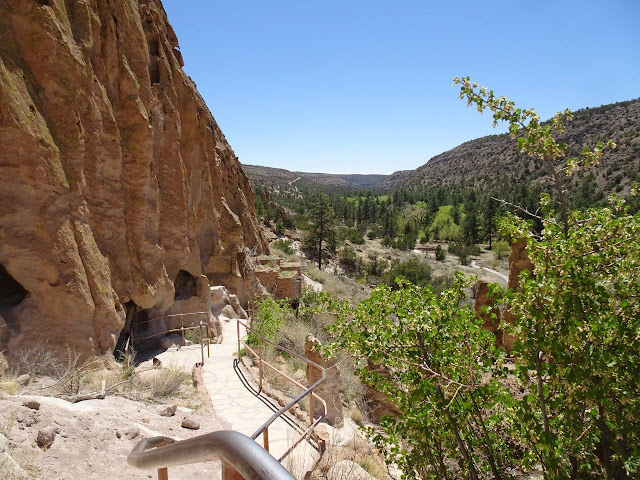 Another ladder to climb to this series of rooms. 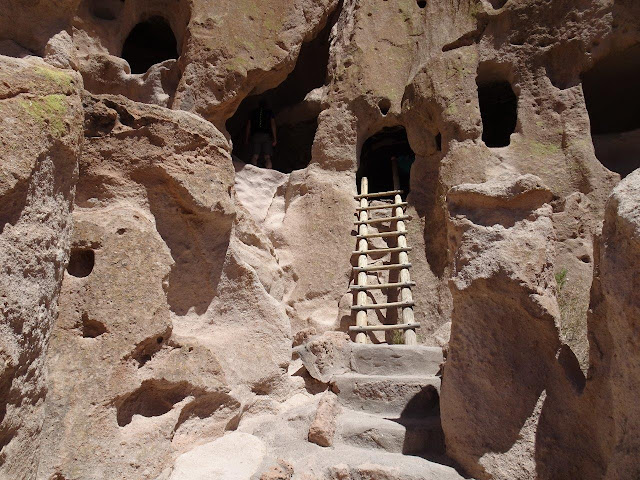 And a terrific view of the pueblo below.  I got tired of walking up and down, so was glad to head back across the river to my motorhome!! 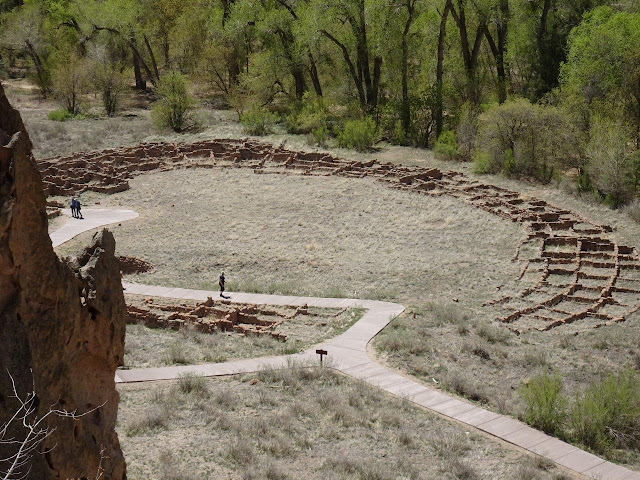 Posted by Grandma on the Road at 9:41 PM