There are a lot of places to hike in Valley of Fire, but one of the easiest and more interesting is the hike/walk to Mouse's Tank.  It is a 3/4 mile round trip, flat hike or walk.  The only thing that makes it slightly hard is that the ground is very soft sand, so it is a lot like walking on dry beach sand--every step takes extra effort, but at least it is flat and not too far.  I have walked on it in the past, so did not go all the way down, but that's fine.

It is a shallow canyon, and on the north side of the canyon, there are hundreds of petroglyphs.  A petroglyph is a drawing pecked into the dark-stained rock using another stone so that the shape or design shows up lighter in color.  It is different from a rock painting because, obviously, there is no paint involved.  A positive is that because the figures are pecked into the rock, they can last hundreds and thousands of years.  It is estimated that the petroglyphs in Valley of Fire are from 2,000 to 4,000 years old.

At the end of the shallow canyon is a large depression in the rock that holds water--hence it is called a tank.  And Mouse, was an outlaw in the 1800s who used the canyon and the tank as a hiding place from the law.  And, obviously, Native American's used this area heavily for thousands of years and made drawings where they camped.

Anyway, it was a cool day, so other than slipping in the soft sand, it was an easy walk. First stop was the visitor center.  If you have kids, right next to the visitor center are large rocks with holes in them where kids can climb and hide. 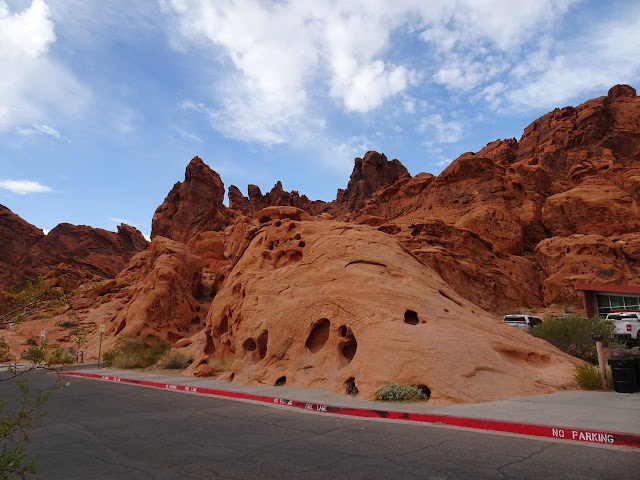 Looking out over the valley and the RV parking lot at the visitor center. 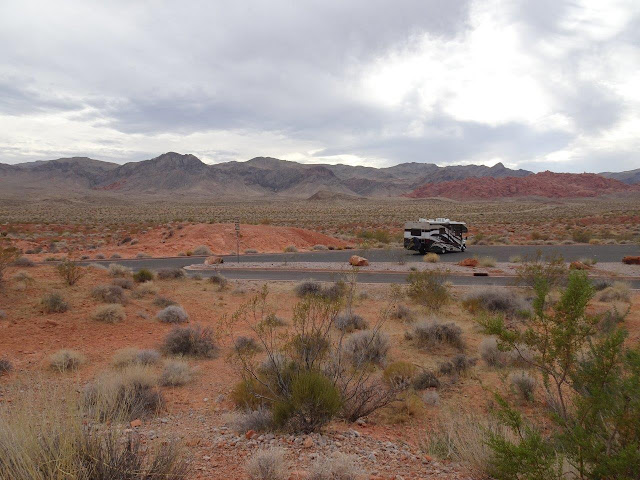 It is a bit of a steep drive up through the rocks to Mouse's Tank. 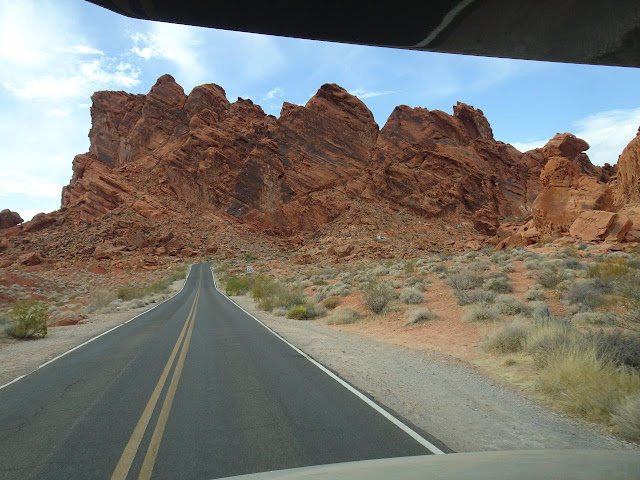 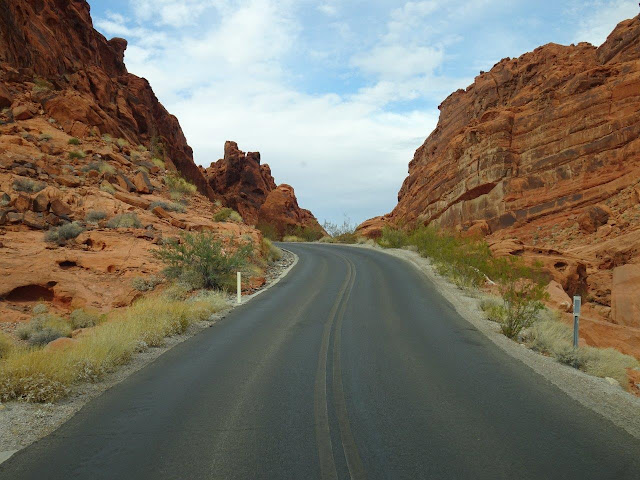 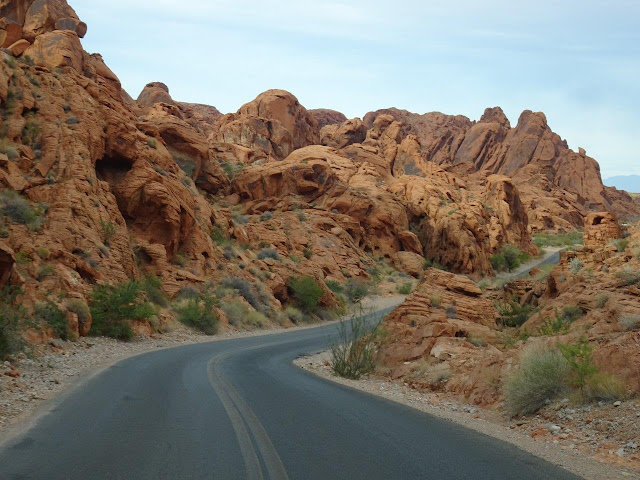 The lot closest to the trail was full, so I had to park just down the road. 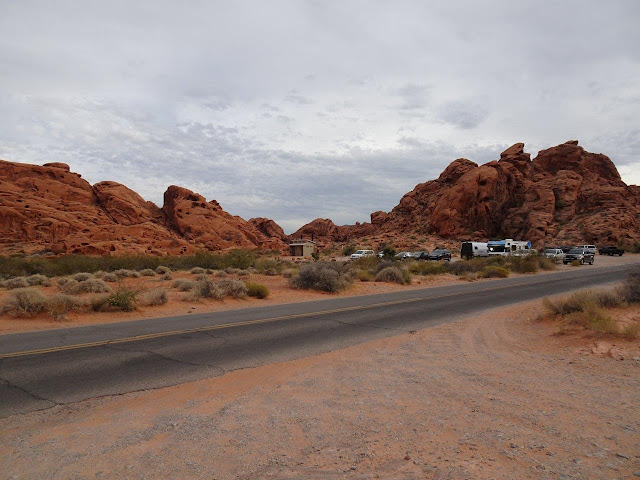 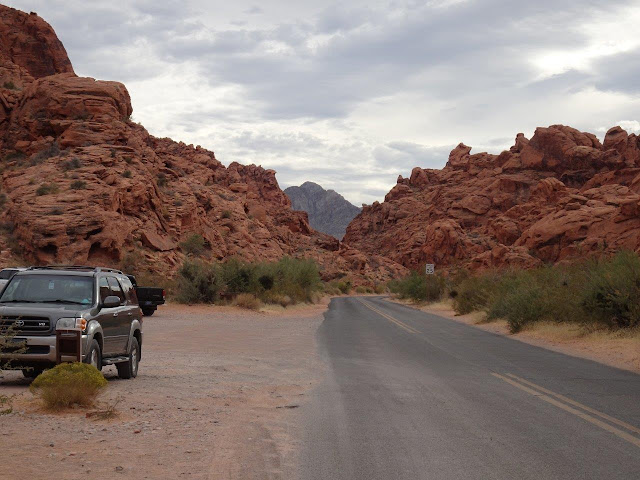 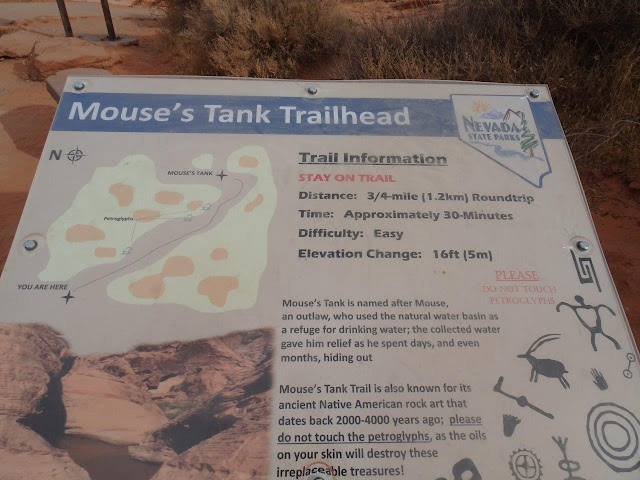 There are deer and maybe elk in this group.  And maybe that spotted thing is a turtle??  Maybe that thing on the far left is a lizard, also. 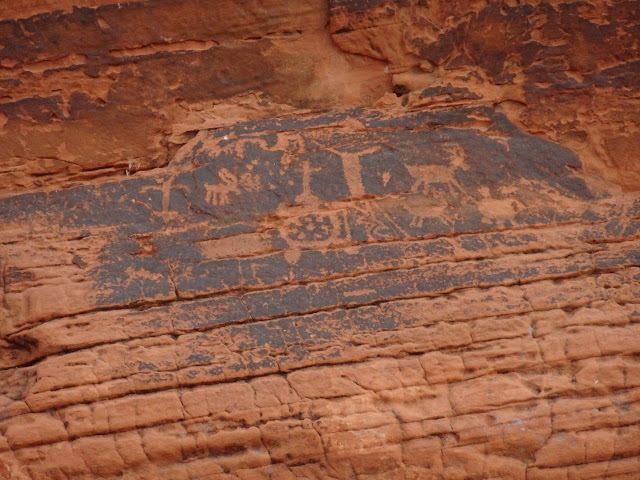 This is what the trail looks like.  Almost all of the petroglyphs are on the left side. 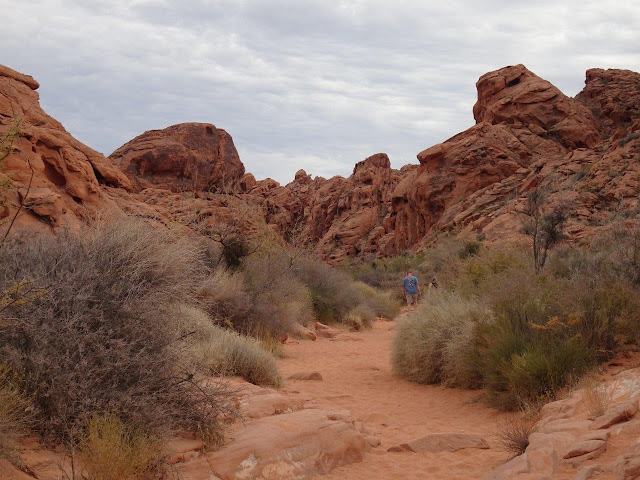 Some dancers??  Two seem to be wearing costumes, or maybe someone pecked out their images?? 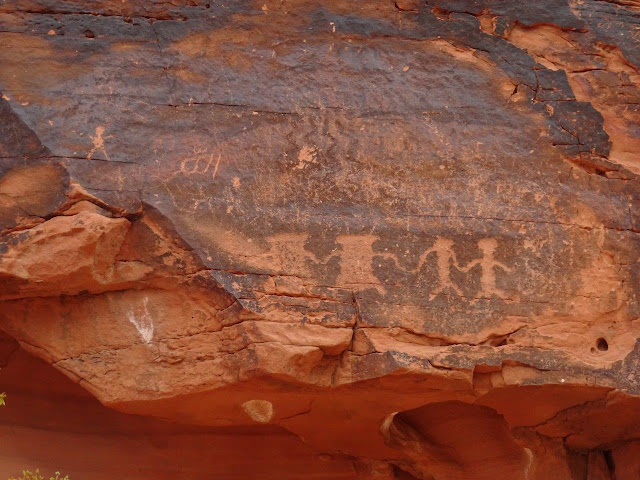 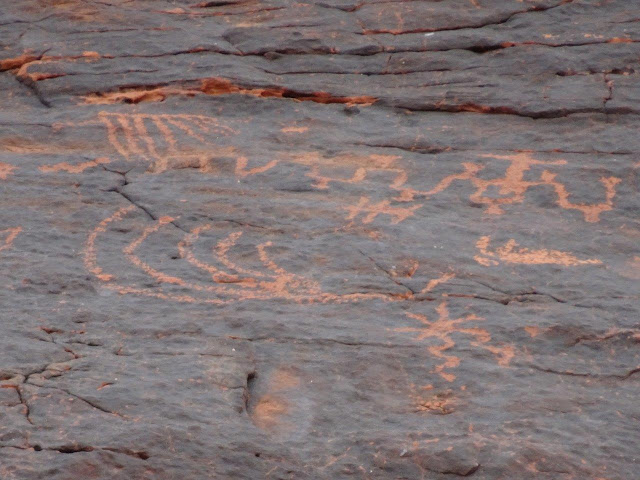 More dancers?  Some people believe the line with vertical lines represent rain.  And maybe the squiggly line is a snake?? 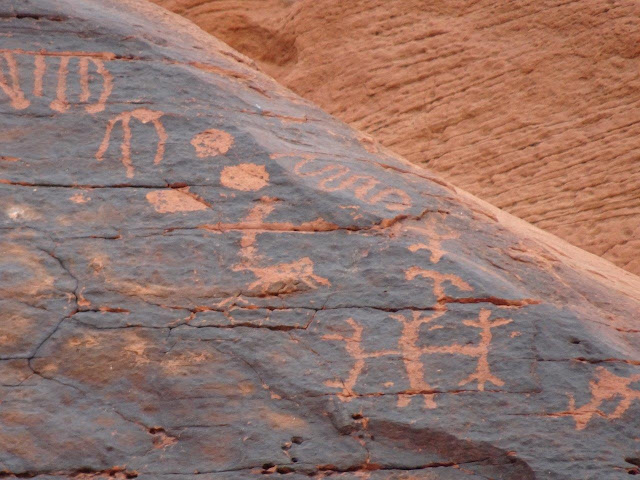 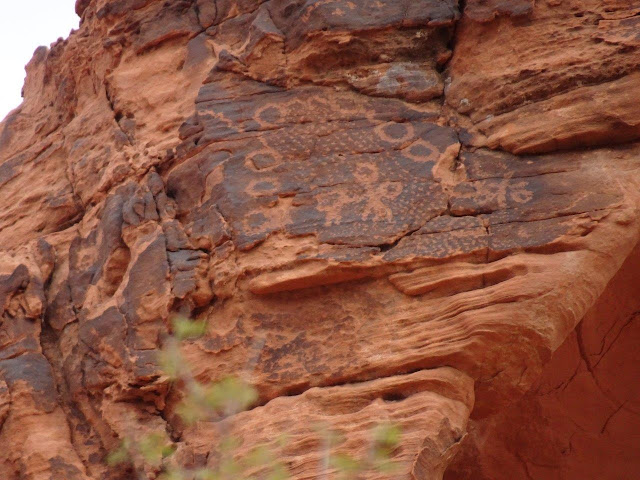 This group looks very old because they are more weathered looking. 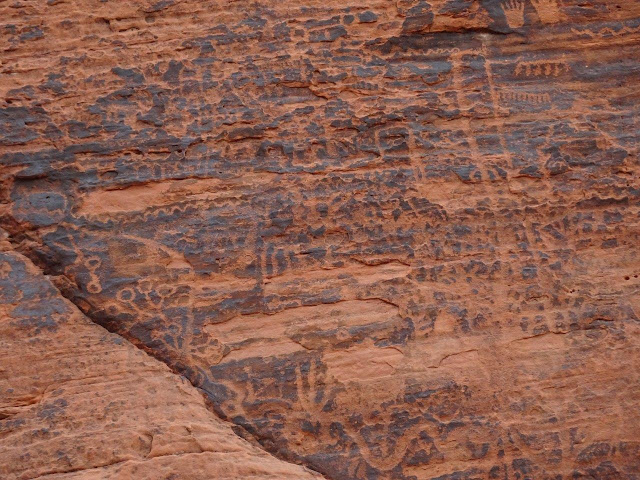 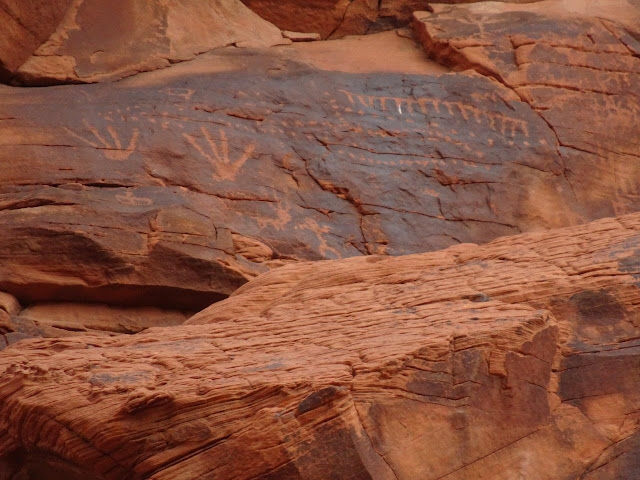 This is a closeup of part of the above. Lots of dots. 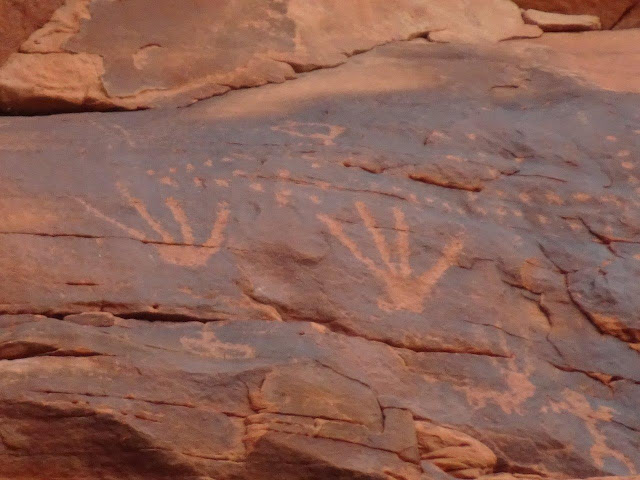 Another view of the trail. 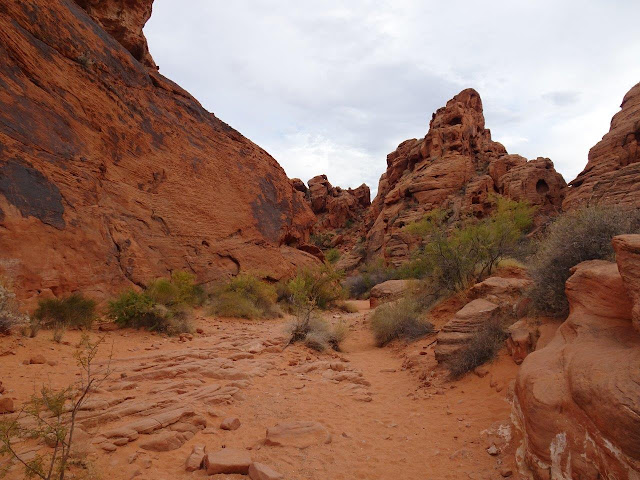 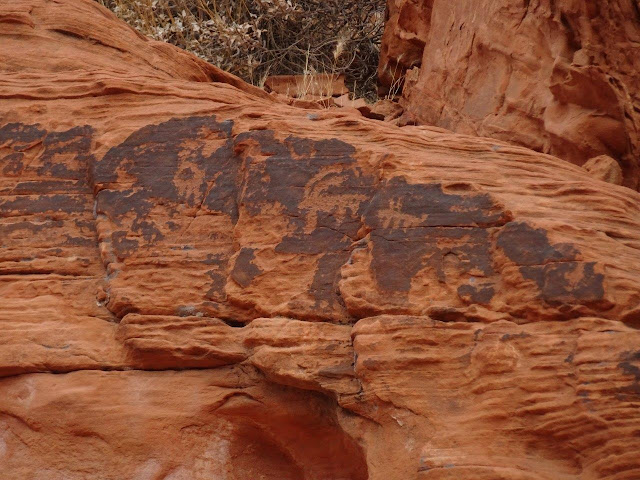 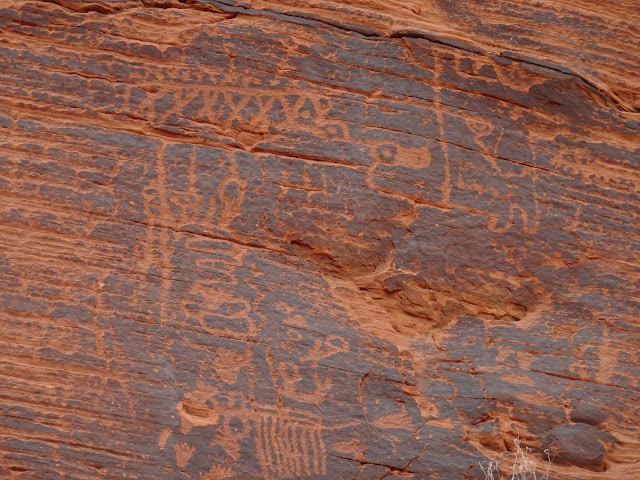 This group is a little clearer. 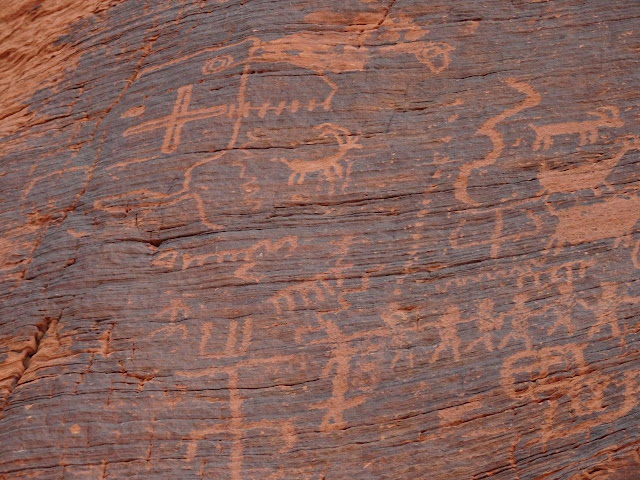 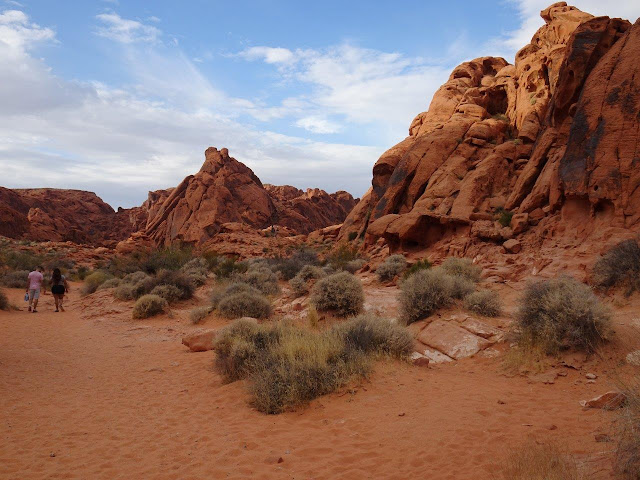 I spent about an hour walking and taking photos and then headed back downhill to my campsite. 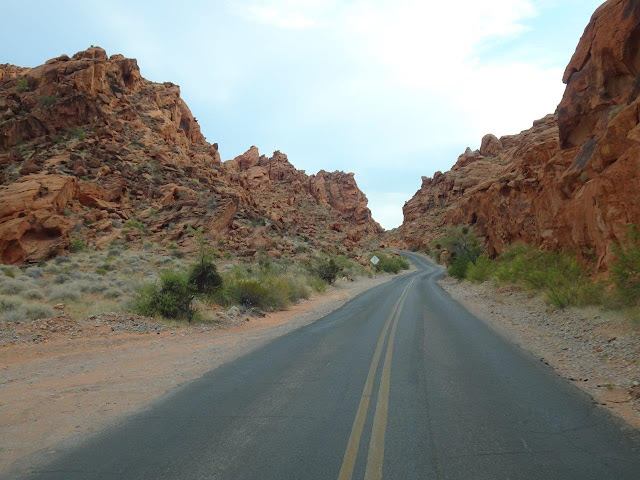 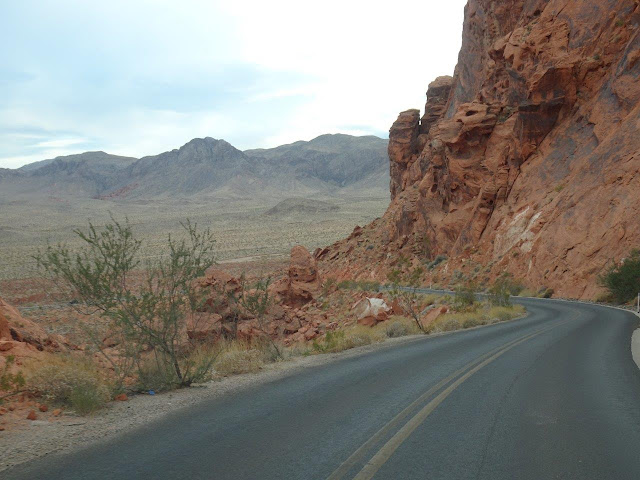 Nice view of the valley. 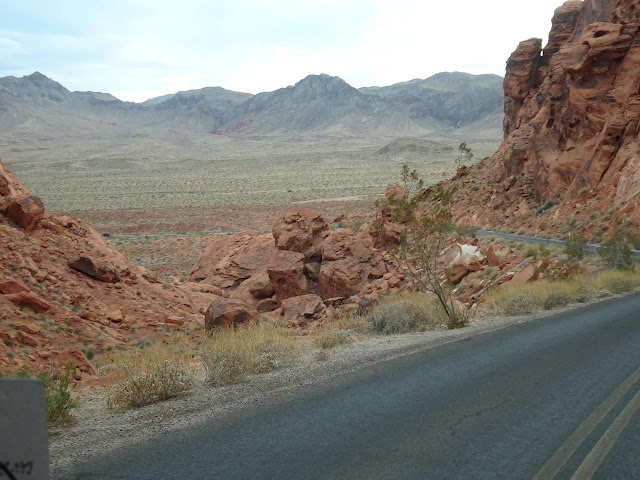