I have been to this national park before, but I had only enough time for a quick drive around the park the day I got there.  The next day, I had horrible kidney stone pain and ended up driving 45 miles east to the nearest hospital with an emergency room!  I spent that night in the town of Dickinson and continued my drive east, but said I would like to come back some time and walk around the nearby town of Madora.  So, it is three years later, and here I was!

The National Park was founded to honor President Teddy Roosevelt, who came to this area in 1883 and fell in love with it.  He had bought a ranch here, and he returned the next year after both his wife and his mother died within a few days of each other.  He hired someone to run his ranch, but returned often during his life.  The area became a National Park in 1947.

The drive here from Hazelton on I-94 was pleasant for two reasons: the lack of traffic on the freeway and the beautiful scenery which was looking more plains-like as I drove west. 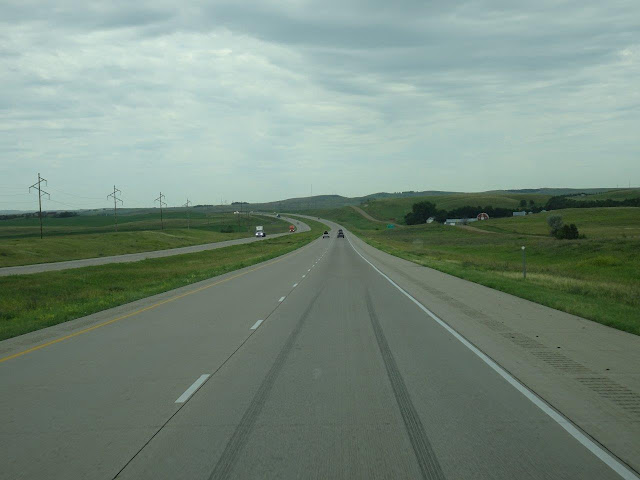 I almost missed this sculpture.  I found out it is called Geese in Flight.  This websites tells about the sculptor and his other works:  https://www.roadsideamerica.com/story/2155.  To me it looks like the geese are on a Native-American dream catcher. 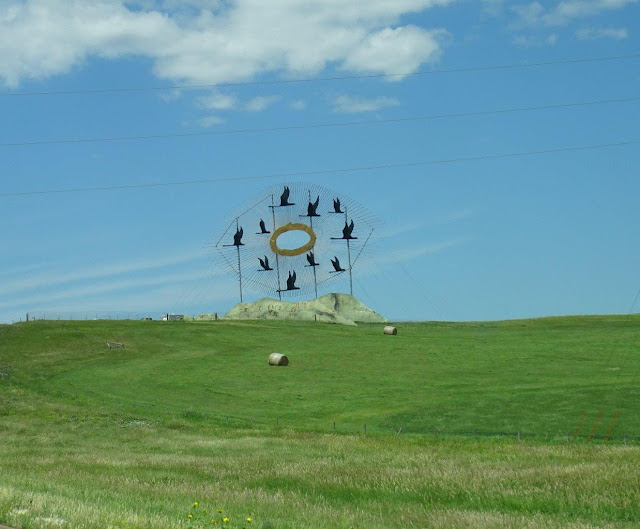 The town of Madora has grown up next to the National Park entrance.  I enjoyed walking around the many gift shops. 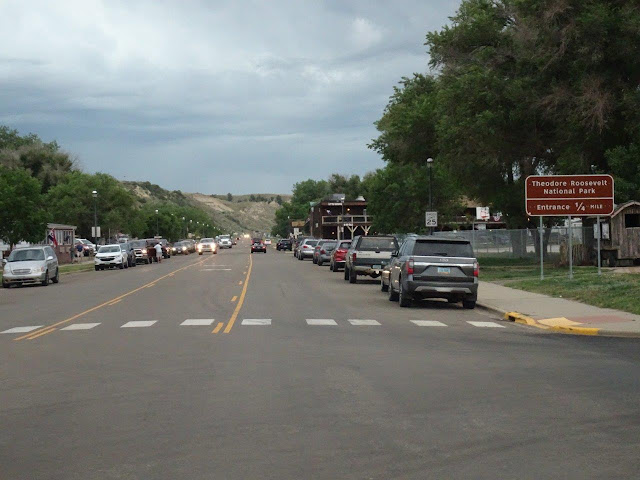 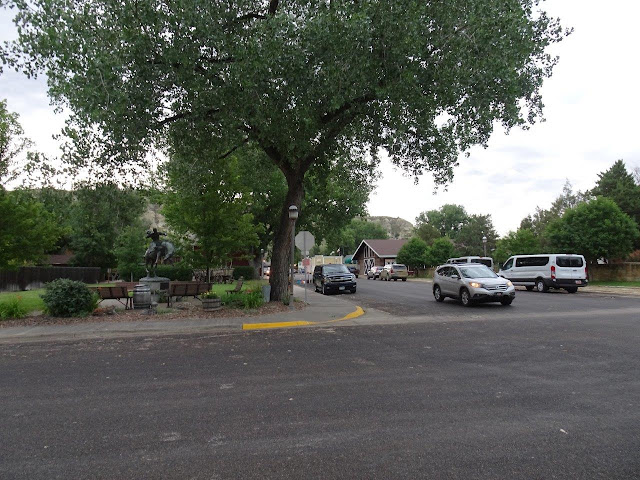 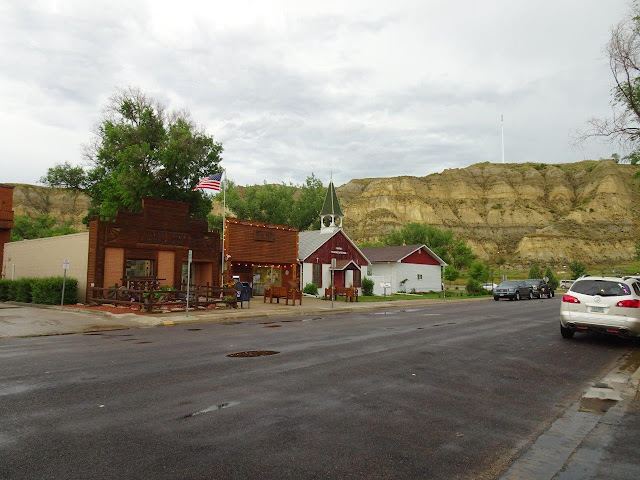 It's not a big town, but a very pretty place to live. 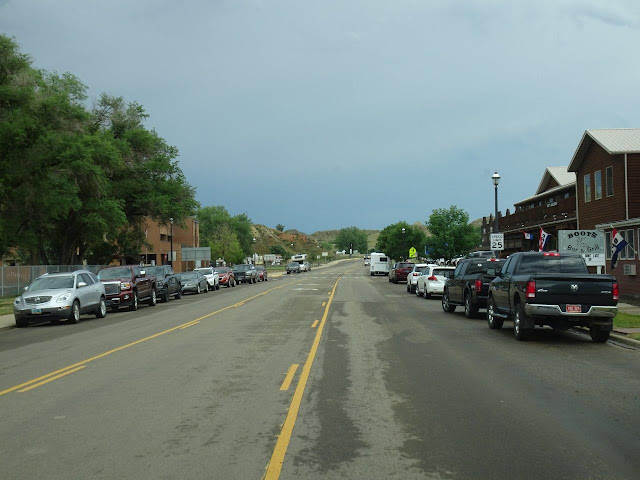 On the edge of town is the national park entrance. 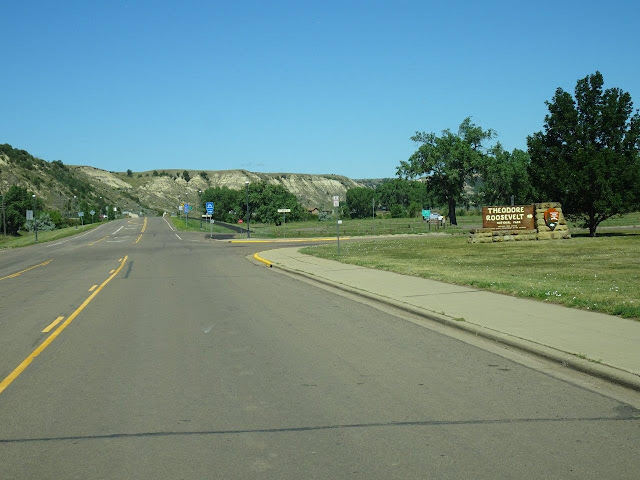 Normally this part of North Dakota is very dry, but they have had a lot of rain in the past few days, so the "badlands" are green. 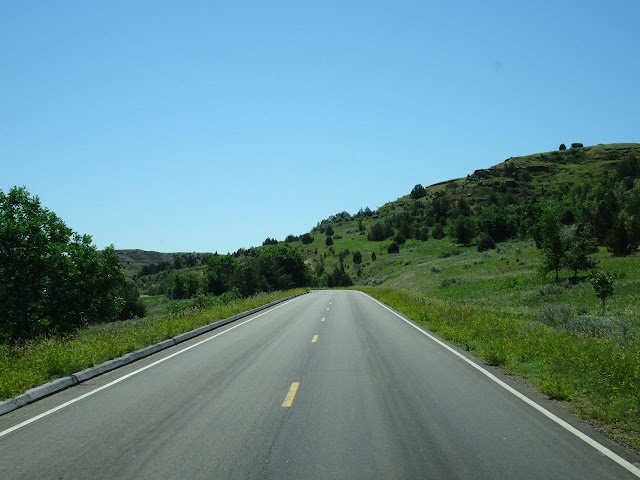 The prairie dog colony, however, has eaten almost everything green in sight, so their areas are brown and dirt. 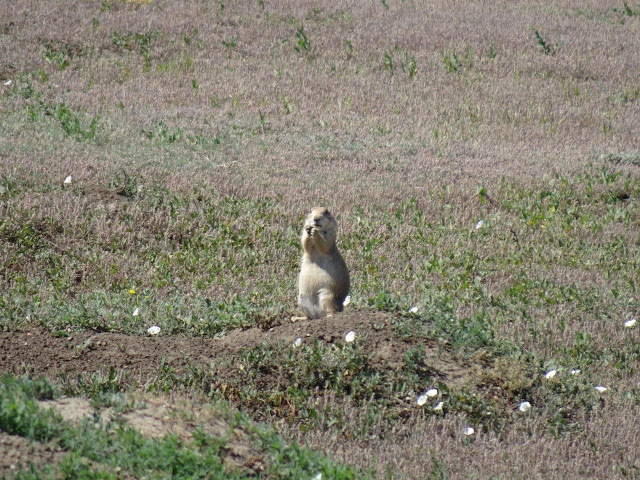 This one looks like he/she is on guard duty. 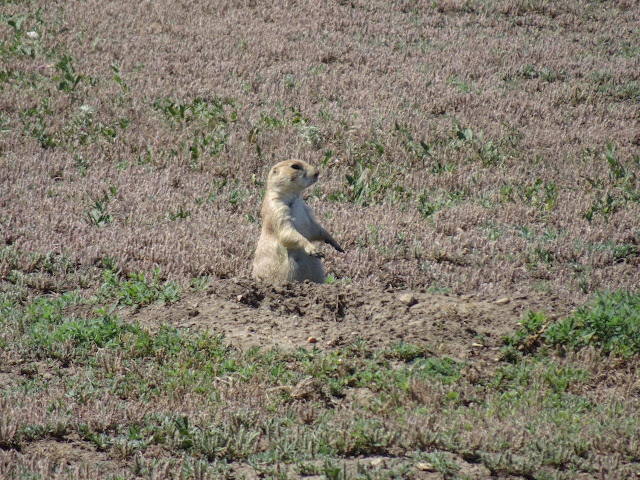 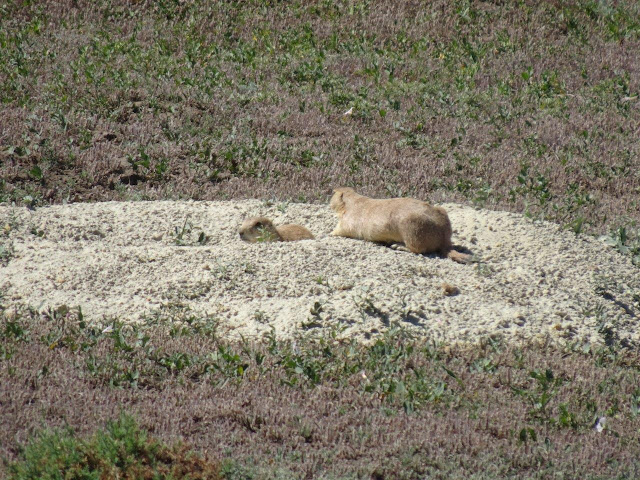 The "hills" are flat on top because they are flat plains.  Rain across eons has caused the soft rocks and dried mud to produce bluffs and shallow canyons. Note the colorful layers in the distance. 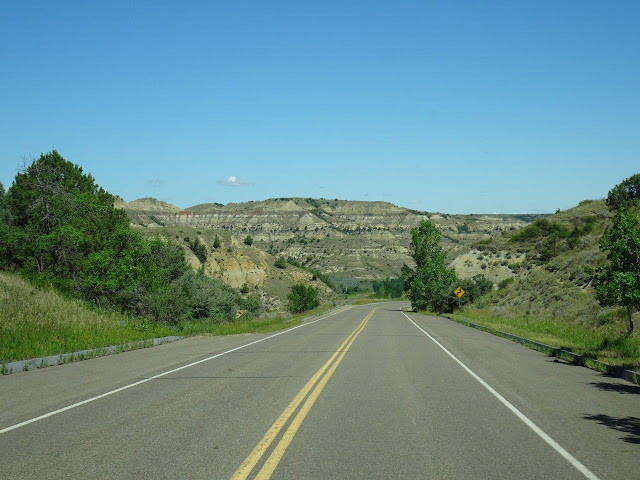 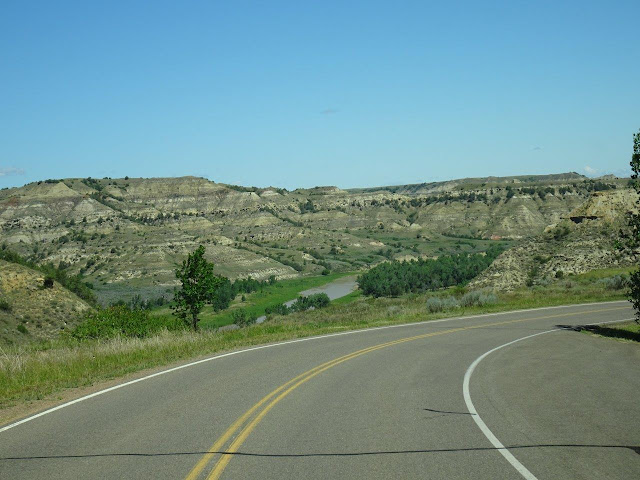 This very big guy was laying alongside the roadway.  It seemed a strange place for a rest, but obviously this bison can rest anywhere he pleases.  The photo does not do justice to his immense size, by the way. 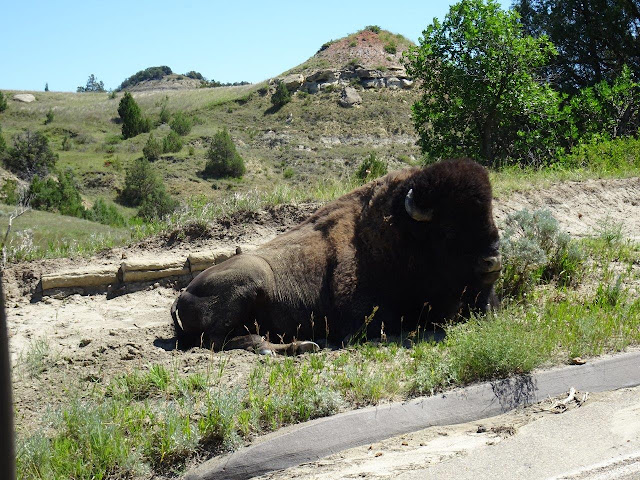 I drove up a ways and then turned around.  Coming back, I noticed he was standing up. 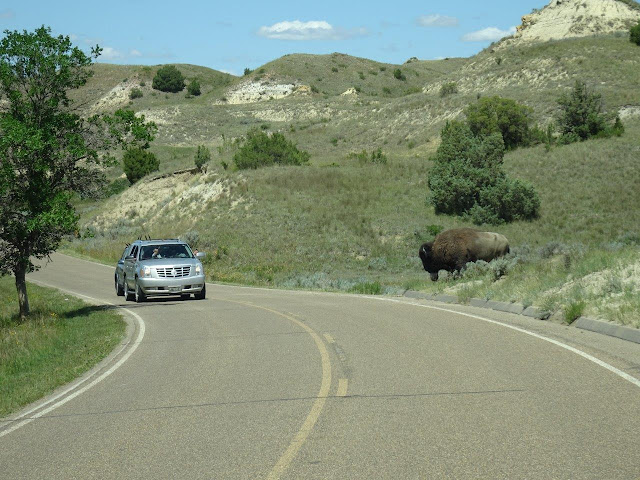 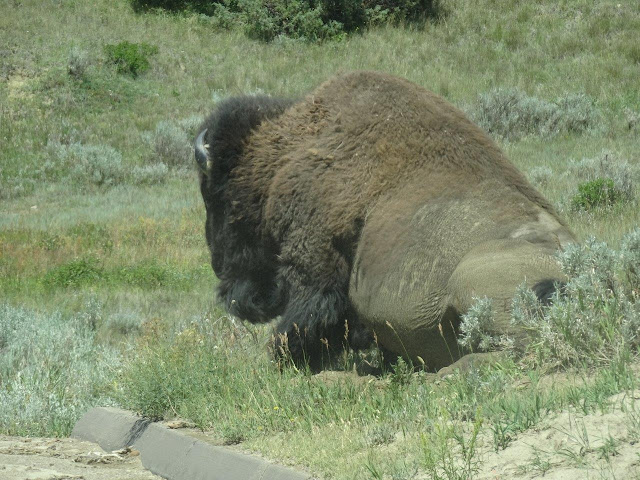 A buddy was crossing the road just ahead. 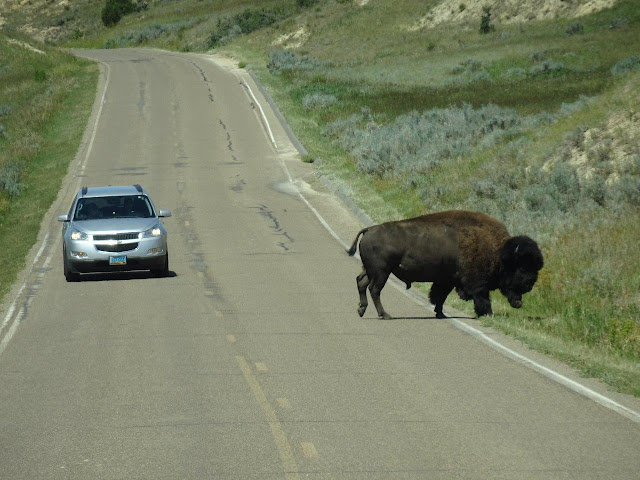 I only caught the second bison, but both animals laid down and rolled around in the dirt. Apparently, these two bits of sandy dirt was just the place for a dust bath. 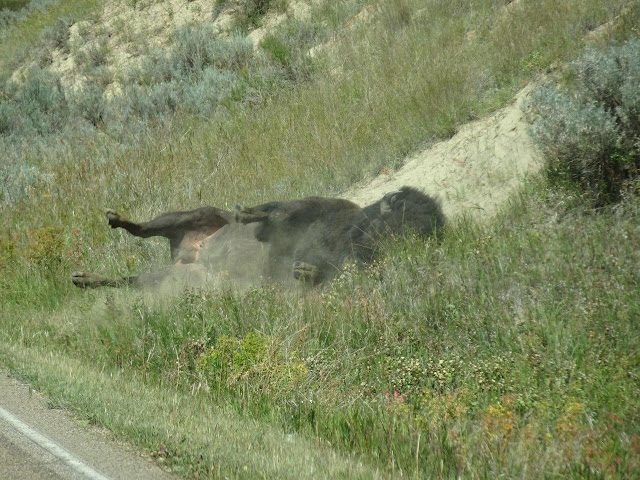 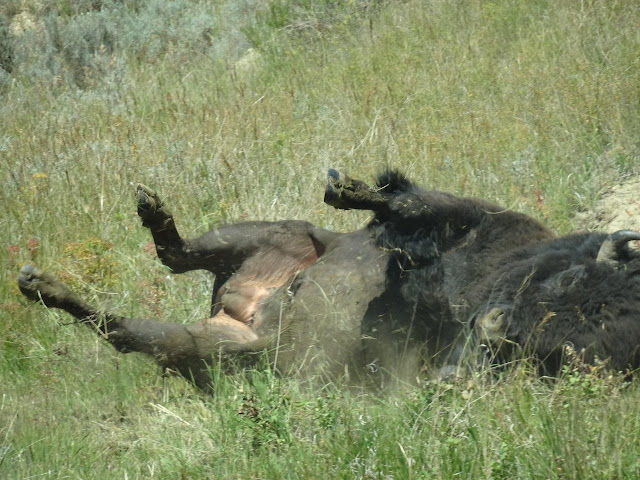 These are prairie coneflowers. 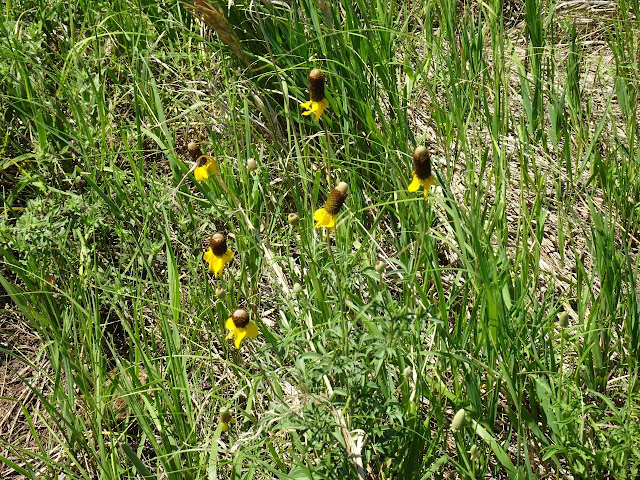 Near the exit of the park, there is a pullout where you can look down over the freeway and into the distance. 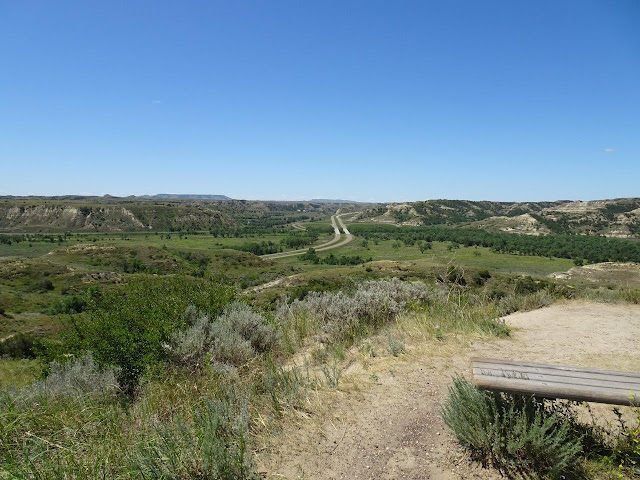 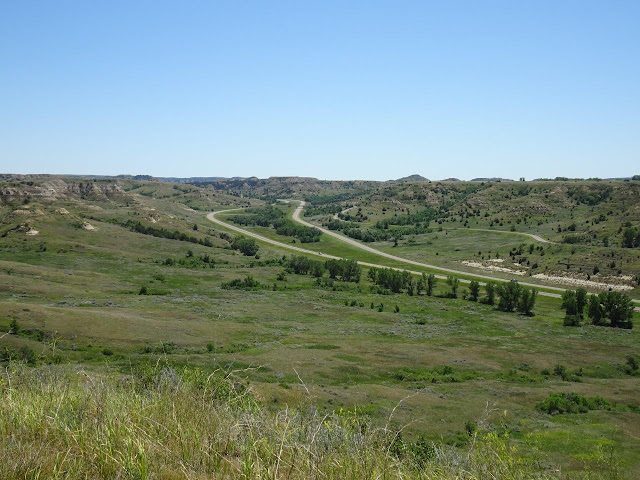 I did not spend much time here, but it was a very pleasant drive and I got to see prairie dogs and a couple of really big bison!!