This is one of my all-time favorite campgrounds because every spot is directly on the lake and has a view.  If you are not familiar with Lake Lanier, it is a Corps of Engineers constructed lake about 50 miles northeast of Atlanta.  The lake is at least 40 miles long, with lots of peninsulas jutting into it, resulting in quiet coves for swimming and boating.  There are several campgrounds on the lake, but I like this one because it mostly consists of the three "fingers" shown on the left on the map below. 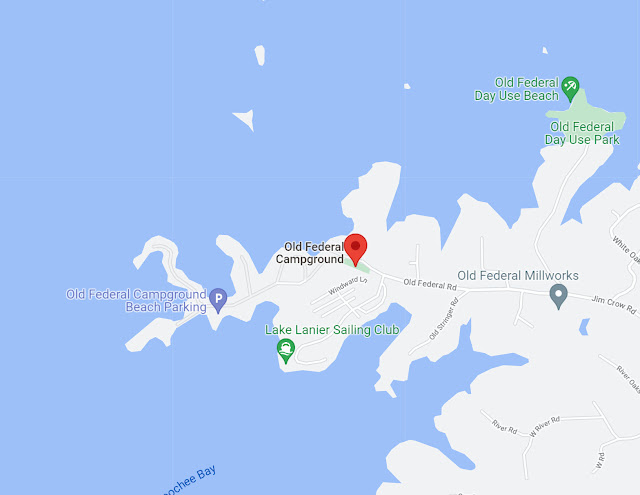 Frankly, because all the campsites have views and are directly on the lake, you really cannot get a bad one.  In addition, all of the RV sites have both water and electric hookups and paved sites.  A lot of people will launch their boats and pull them up on the shore near their campsites.  Here are some examples of the views and campsites. 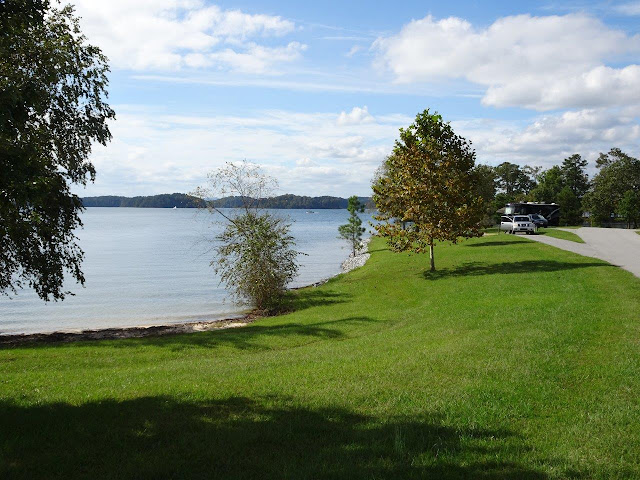 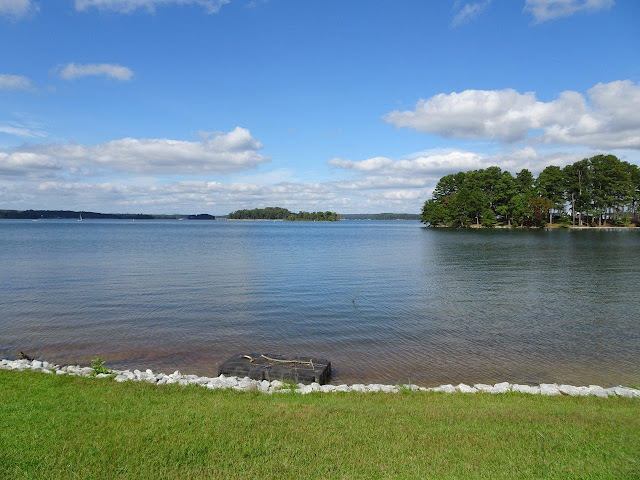 This photo is taken from the middle finger, looking across at other finger across a small cove. 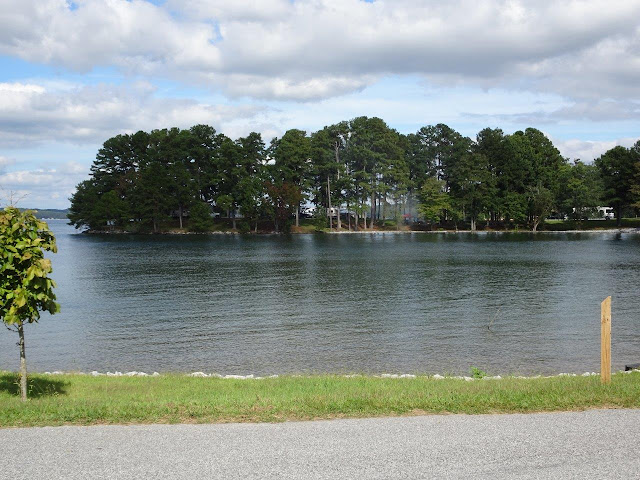 Another good reason for coming here, other than the $13 per night senior cost, is the laundry in the restroom.  There is only one washer and one dryer, but that is a lot more than is many places!!  I did three loads of laundry when I arrived and three more just before I leave tomorrow.  Machines cost only 75 cents per load, also. 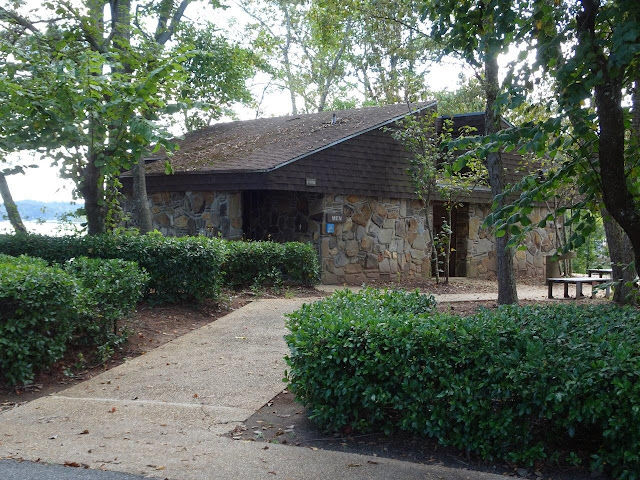 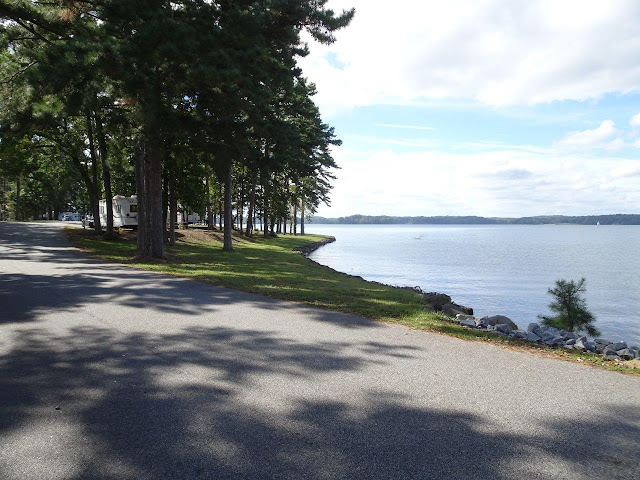 This is a walk I took down the farthest west "finger." 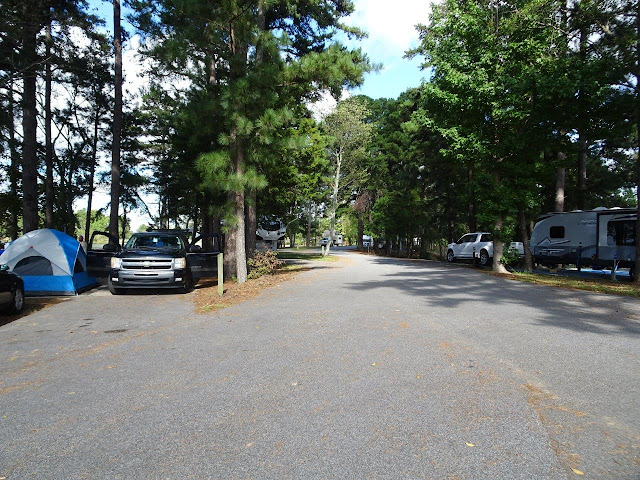 I am going to try to find one of these birdbaths that just stick into the ground.  It was attracting a lot of birds and would be easy to travel with.  Could also fill it up with birdseed, I suppose. 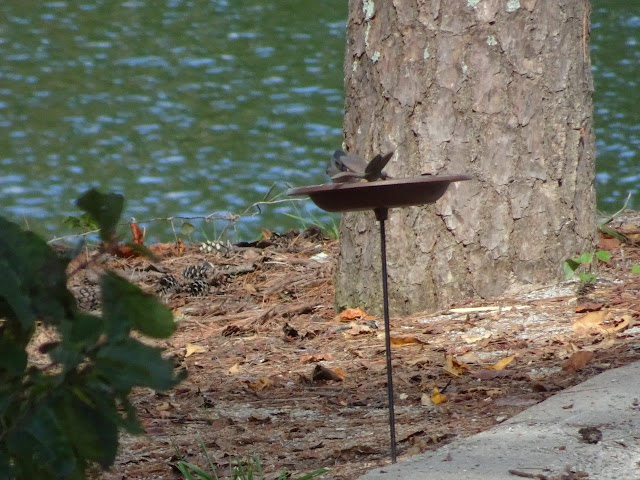 This old tree had a nest in this branch-hole.  Had lots of activity but I don't know what kind of birds these were.  Anyone know what this bird is?? 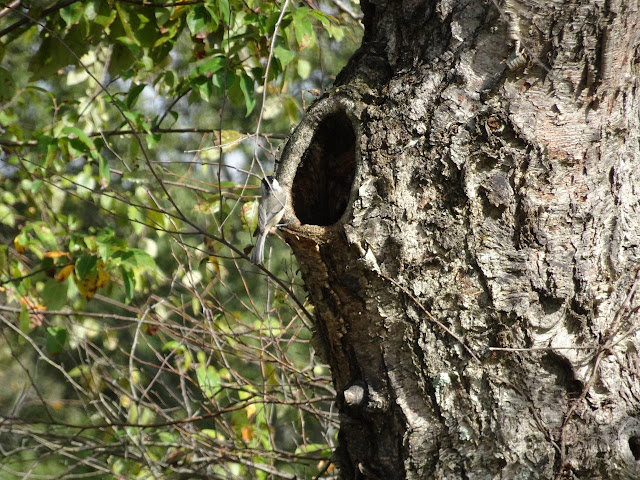 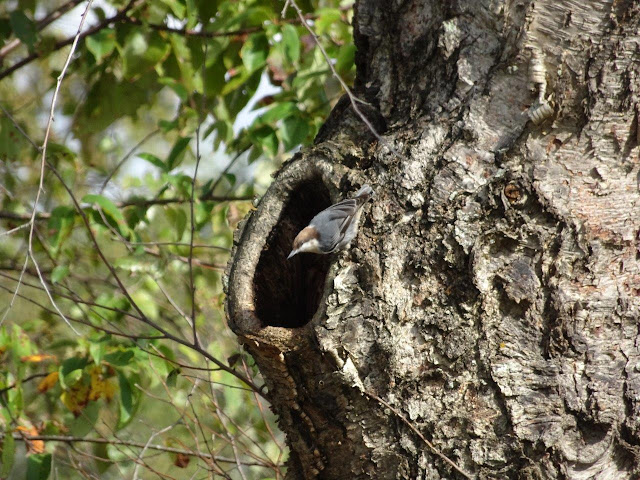 And what in the heck this tree is???  The fruits are about 1.5" in diameter.  Could not see any on the ground that I could inspect.  Tree had long, oval leaves. 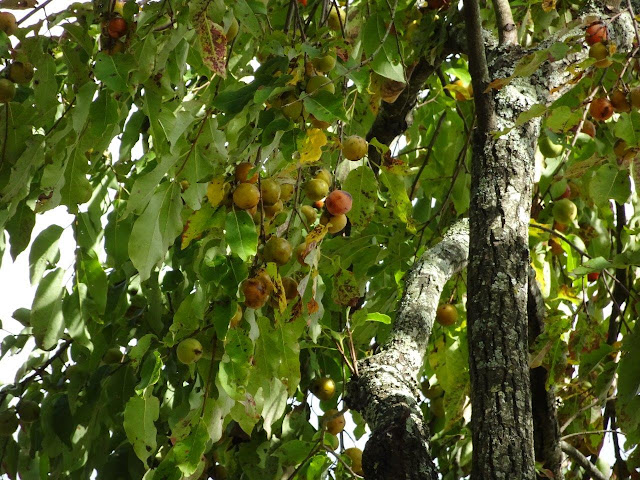 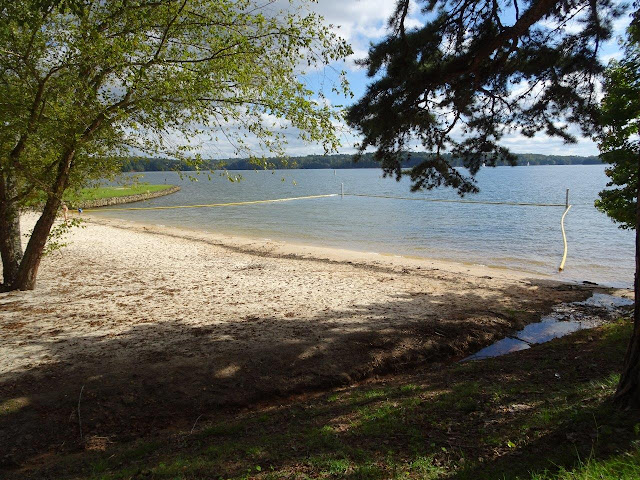 I have been in three sites in this campground.  While this one is not my favorite, I still had views of both sides of the major peninsula. 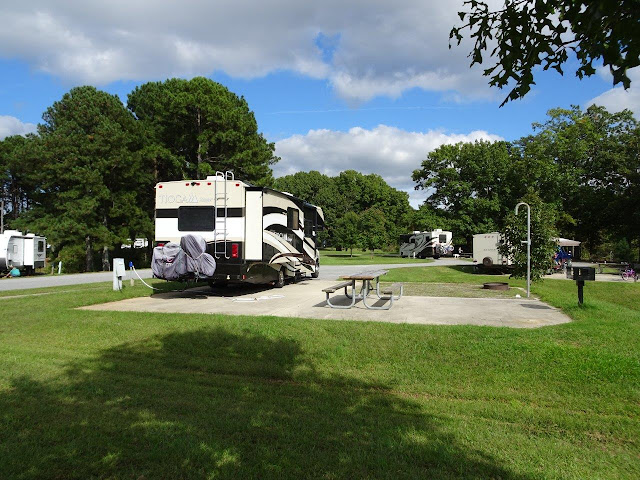 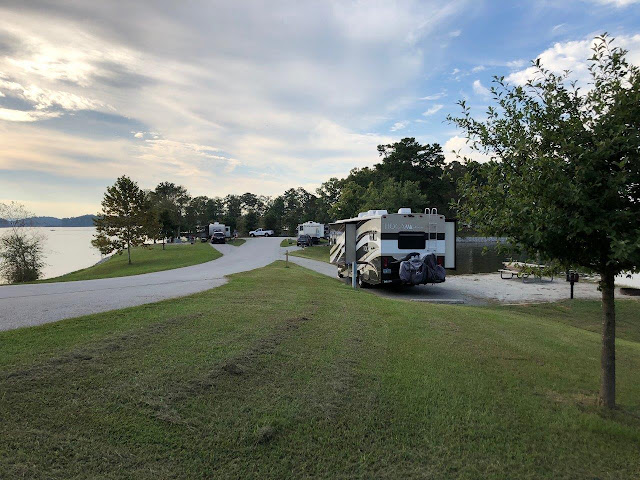 What was really interesting is that one day when I was coming back from visiting my aunt here, I found one of my neighbors training his young red-tail hawk.   In the first two photos, he is enjoying a raw chicken leg. 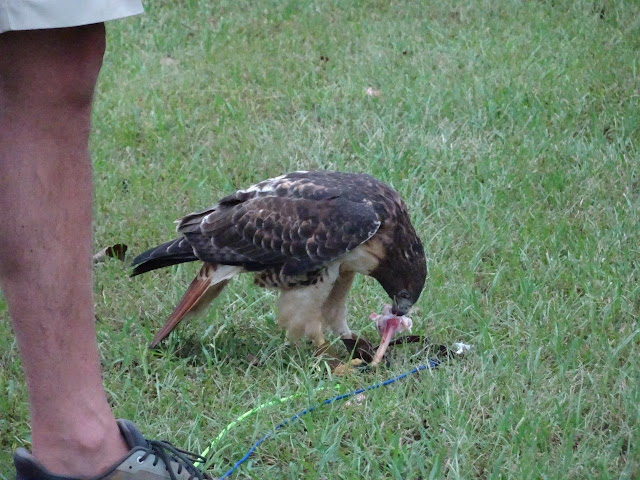 Isn't he gorgeous???  Look at those leg feathers! 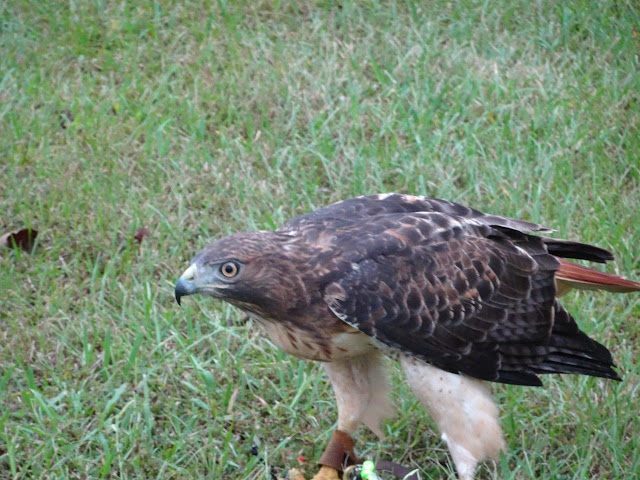 And here he is sitting on his owner's hand after flying in from his perch on command. 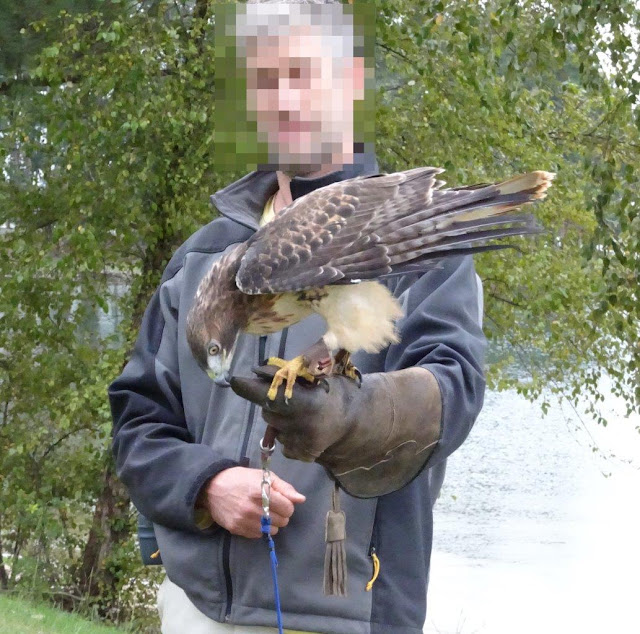 At his point, he turned and looked directly at me. 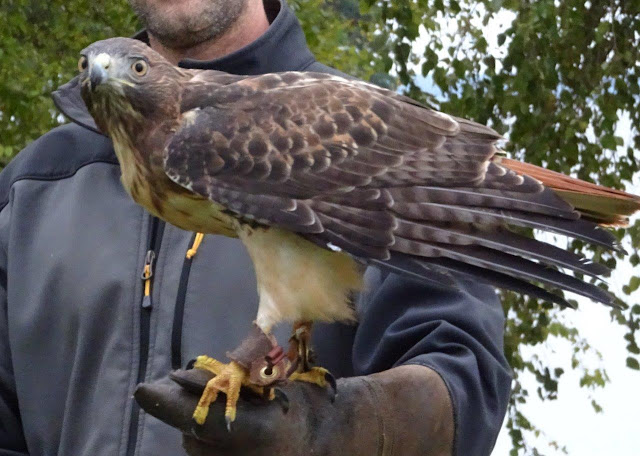 The bird's owner said that the hawk was just two years old and was obtained at a few months old.  He will be released into the wild again in a few months.  Apparently, most red-tail hawks do not survive their first year, and released birds become wild again very quickly upon being released and do very well on their own.

Posted by Grandma on the Road at 5:43 PM